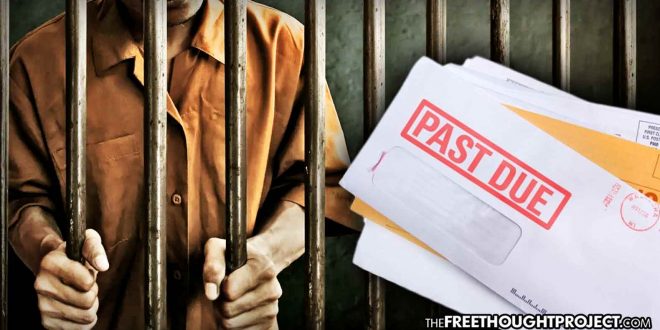 Philadelphia, PA — In the land of the free, those who can afford to pay the state exorbitant amounts of money for their criminal behavior almost always avoid spending any time in jail. If you doubt this claim simply look at the mega banks caught laundering money for terrorists and drug dealers who never go to jail. Or, look at the financial institutions who are constantly caught stealing from American citizens in fraudulent schemes and merely pay a fine to avoid any jail. Or, look at the massive tech companies who get caught illegally exploiting millions of children, pay the state, and face no other consequences. If you are a common citizens, who doesn’t happen to have billions of dollars, however, you can and will be sent to jail for a very long time for being unable to pay the state.

A father of two in Philadelphia is learning about this two-tiered system of justice in the land of the free the hard way this month after his inability to pay just $1,941 in court costs led to him being kidnapped and caged for years. To be clear, Maurice Hudson, 29, had already done his time for a burglary charge that happened over a decade ago. Despite being sentenced to two to four years behind bars in 2009, the state still wanted their cut. But Hudson — a struggling father and part time janitor — didn’t have the extra cash around to just give to high paid judges.

This made the judge in the case seemingly angry with Hudson who then scolded the struggling father for being unable to pay the ridiculous court costs.

“Each time, he has come back here with excuses,” Judge Genece Brinkley said of Hudson.

“I’m struggling out there on the streets,” Hudson, now 29, told her. As the Philadelphia Inquirer reports, Hudson had come home on probation, gotten married, and become a stay-at-home father of two young girls with special needs. He earned only $150 a week as a part-time janitor. “I keep hearing it every time I come in front of you, ‘I’m not trying.’ How is it I’m not trying?”

Brinkley couldn’t have cared less that this struggling father was raising two children with special needs and working a part time job to do it. She wanted her $1,941 and because Hudson couldn’t afford it, she would take it from him by kidnapping and caging him for 1 and a half to three years in a state prison.

Brinkley went so far as to claim kidnapping and caging this father for being unable to pay was “absolutely necessary to vindicate the authority of the court.”

As the Inquirer reports:

Appeals courts have ruled people cannot be incarcerated for nonpayment without a determination that they are actually able to pay. Yet, in Hudson’s case, said Cheryl Brooks, a Philadelphia public defender, “he was essentially jailed for his poverty.”

Sadly, Hudson’s case is anything but isolated. TFTP has reported on multiple instances of people who find themselves unable to pay their bills only to end up on the receiving end of the police state. Despite the fact that debtor’s prisons are illegal in the United States, TFTP has reported on numerous incidents like this one.

As TFTP previously reported, in what could be a story straight out of the Onion, but sadly played out in reality, a Texas man was arrested by seven heavily armed U.S. Marshals for failing to pay an almost 30-year-old student loan debt.

The man, Paul Aker, 48, said he was caught off-guard by the heavily armed agents that showed up at his home to arrest him for failing to pay the nearly 3-decades old debt.

“They grabbed me, they threw me down,” Aker told the Daily News. “Local PD is just standing there.”

Aker’s arrest for a 30-year-old, $1,500 dollar debt was disturbing enough; but taken in concert with the fact that simply being an owner of a firearm, a protected right under the U.S. Constitution, was reason enough for agents to arrive in combat gear and with fully automatic weapons raises the ominous specter of the police state rising.

After being arrested, Aker was held at the federal building in downtown Houston, before being brought to a courtroom, where a “prosecutor,” judge and county clerk were present, according to the NY Daily News. Aker said the alleged “prosecutor” was really a collection lawyer.

“Then I get a lecture (from the judge) about the United States and stealing from the government,” Aker said.

It is extremely worrisome that armed agents of the state are being used to bully people into paying delinquent student loan debt, medical bills, and court costs. There has to be a more intelligent manner in which to attempt to reconcile these debts than to kidnap and cage struggling dads for being unable to pay court fees.

These examples and others like them speak to the nature of the state itself that the default position is virtually always one of coercive force rather than to intellectually assess the means that will most likely provide the desired result – a reconciled debt.

If you deprive someone of their freedom, they will never be able to pay their debt, and in fact, it will cost the taxpayers far more. The judge throwing Hudson in a cage for three years could end up costing taxpayers upwards of $180,000 and the judge thinks this “vindicates” the court. But then again, when the only tool you have is a hammer, everything begins to look like a nail—including struggling fathers unable to pay the court for the privilege of being thrown in a cage.