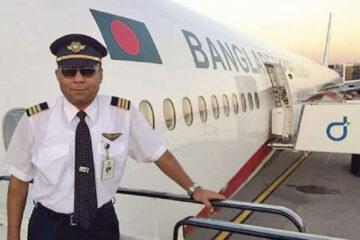 Well, we have read the reports about the Jet Blue pilots dying following taking the experimental COVID shots, and of course, the Delta pilots that faced a similar fate. However, this seems to be the first incident where a pilot has suffered an in-flight terminal stroke. Was this pilot given the shot?

The report comes from The Times of India.

Latest clinical investigations revealed that Qaiyum is a patient of hypertension and diabetes. “He suffered a brain haemorrhage mid-air which probably led to clotting and subsequent heart attack,” said Dr Virendra Belekar, intensivist at Kingsway Hosptial where the pilot was rushed after emergency landing on Friday morning.

Qaiyum is still comatose and on ventilator support with hemodynamic support, said a medical bulletin.

Qaiyum’s family is expected to arrive on Sunday morning. Dr Belekar said further course of action would be decided once the family members reach Nagpur. “His brain functions have not regained. Everything depends on whether he regains consciousness in next 24 to 48 hours,” he said.

No decision on airlifting the pilot to Bangladesh has been taken. Biman Bangladesh officials are said to be ready with a plan if the family gives green signal.

The airline officials have left it on the family to take the final call. The hospital would be counselling the family regarding continuation of life support.

Dr Ranjan Barokar, critical care specialist and head of intensive care department at Kingsway, said after stabilising the pilot, a CT scan was done of the brain. “It showed bleeding in the pontine area which was associated with a diffused brain injury because of prolonged resuscitation, hypoglycaemia and hypoxia. He is still on ventilator and his body temperature is being kept low as per protocols. Soon, we will be reversing the process and bringing him back to normal body temperature. After this, another CT scan will be done for neurological assessment again,” he said.

Dr Barokar added, “We have communicated to the family and the embassy that his condition seems to be very poor. His relatives are expected to arrive by Saturday evening.”

The pilot was put on ventilator after he slipped into coma following mid-air prolonged cardiac arrest on route to Muscat-Dhaka flight. The 124 passengers and six crew were flown in the same Boeing 737 aircraft by a rescue team which had arrived at 9.15pm in a Dhaka-Dubai flight.

Now, we are not told whether this pilot had the COVID shot or not, but given his age, what took place and the fact that the symptoms he faced were oddly similar to those of those who take the shot. We’ll see about confirmation as to the shot though I’m not expecting the media or airlines to be upfront about it if the pilot did get the shot.

TRENDING: Adrenochrome, Child Protective Services & The Business Of Trafficking, Killing & Selling The Blood Of Our Kids

Just a couple of days later, the pilot died at the hospital and was laid to rest shortly thereafter.

CAPTAIN Nawshad Ataul Quaiyum, the Biman Bangladesh Airlines pilot who took ill while steering a Dhaka-bound flight from Muscat, Oman, on Friday, following which the plane had to make an emergency landing in Nagpur, died at the city’s Kingsway Hospital on Monday.

A Bangladesh news portal, bdnews24.com, quoted Biman Bangladesh Airlines’ spokesperson Tahera Khandaker as saying, “We have heard from the hospital that he is no longer with us.”

Dr. Jane Ruby uncovered the incident and spoke about the warnings she has issued regarding pilots taking these experimental shots.