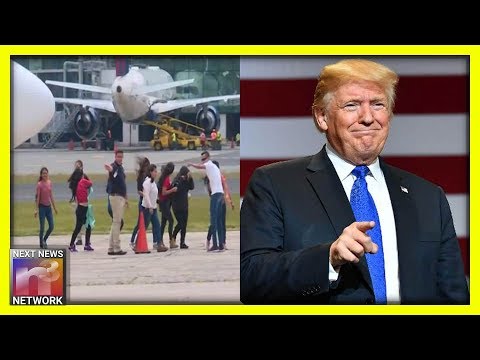 Thanks for visiting. Don’t come back.

Some think it heartless to call illegals criminals but that is what they are.

Unless immigrants follow & respect the laws of this country, they need to go home because they are just an UNFAIR burden on those who do follow the law, work hard, pay taxes, etc.

Here’s Josh from Next News Network:

Video was released this month of plane load of illegal families being mass deported back to Guatemala.

It’s not clear why they are being deported, but it may be because President Trump narrowed the criteria recently for passing the initial criminal fear interview. Families of the victims of gang violence no longer pass the test with that claim. That was radical progressive overreach by Barack Obama. Honduran families are also being sent back to Honduras and Salvadoran families are being sent back to Salvador.

Illegals are also being sent to Mexico.

Roger ads that this is apparently *not* due to the recent agreement with Guatemala, because that would have involved sending people from other countries to Guatemala to apply for asylum there.

For whatever reason, its very refreshing to see planeloads of fake refugees going back to Central America.

Many of them look happy to be back home.

Don’t let the door his you in the assets.

Guatemalan refugees can be especially dangerous, along with those from El Salvador and Honduras.

We really don’t want people from those countries here.

Obama tried to hide who they were.

Trump is giving them a one-way ticket home.

Recently we’ve received some other good immigration news that Trump’s new wall has been effective.

Now, let’s finish the wall and lock these people out for good.

Some will get in, because some will always find a way, but not nearly as many.

And if we are letting in less drug dealers, murderers and rapists, that’s a start.

We already have a very large criminal element in this country and we sure as hell don’t need more Democrats entering.

Rather than import more Democrats, why don’t we consider deporting those we have so they can be with like-minded people?

We’d be doing them a favor.