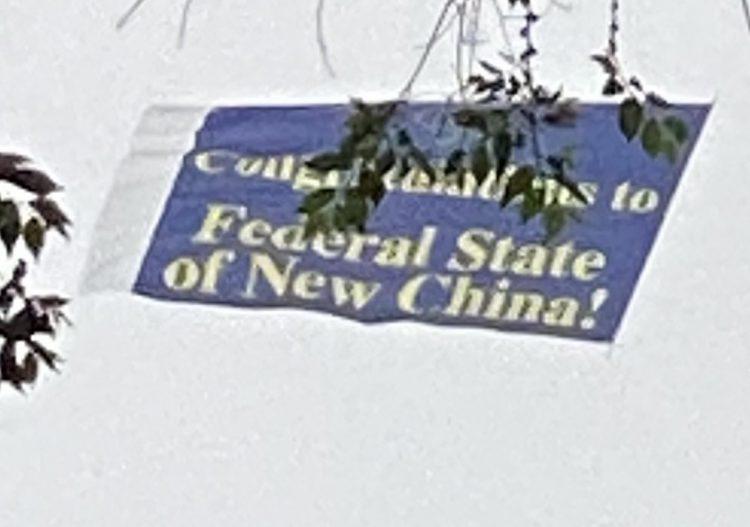 On Wednesday, several propeller planes flew over New York City pulling behind them banners that congratulated a “Federal State of New China.” People have been wondering what was going on.

Here’s an images of the banner.

Hey, anyone know about the planes flying over #nyc with banners saying ‘Congratulations to the Federal State of New China?’ Why? pic.twitter.com/ac5Jf9kQyN

The banners appear to be a bizarre stunt against the Chinese Communist Party launched by Steve Bannon and a fugitive Chinese billionaire, who together on the anniversary of the Tiananmen Square massacre declared the Chinese government illegitimate.

“From today the Chinese Communist Party (CCP) will no longer be the lawful government of China,” the billionaire, Guo Wengui, shouted into a livestream from a boat in New York Harbor, with Bannon by his side and the Statue of Liberty in the background.

“I’m here to tell everybody that loves peace, law, humanitarian — we’re going to end the Communist Party once and for all. We got hundreds of countries of support,” Guo claimed.

Onlookers on Twitter said they noticed as many as eight planes carrying banners, some with the message “Congratulations to Federal State of New China!

Here’s the announcement by Steve Bannon.

Guo, a frequent critic of China, has recently been pushing coronavirus theories alleging the virus began in a Chinese lab.

He was described by the New York Times Magazine as a mysterious exiled businessman lobbing “impossible-to-verify” accusations at China’s ruling elite, photographed in the feature in a white suit and holding a Pomeranian.

Trump’s former chief strategist joins Guo in a chant of “Take down the CCP!” before Guo kisses Bannon on the cheek.

Guo, who also goes by Miles, fled China in 2014 just before he was accused of ripping off business partners and scheming with corrupt government officials, The New York Times previously reported. He has been an outspoken critic of the Chinese government who has warned that Beijing is attempting to spread its influence and propaganda in the U.S.

While Fox News has seemed to support this, the fact of the matter is that Fox News continues to be controlled opposition and my guess is that this is nothing more than Communist propaganda. There’s no way these Commies are giving up that easy. No. Way!

Take, for instance, Bannon’s claim to advance “democracy,” but not a republic.

Additionally, “ensure education is compulsory” contradicts the concept of a free society.

Some have claimed that Bannon is a secret communist. I can’t confirm that, but I can tell you that a lot of what is being advanced here is nothing more than propaganda. This is to soften up the West for something much bigger while Q followers get excited about Nesara and Gesara, but I believe the big reset on its way is not going to be anything like they hope it will be.

Clearly, the claims that China unleashed the coronavirus have not actually been proven, just stated. In fact, during a previous interview, it had been determined that that strain alleged to be effecting Americans, which is also questionable, actually came from the US.

Remember, when something promised that is so big and so unbelievable, it probably is.

At least five planes were seen flying over the Hudson on Wednesday.

I have no idea but Now they are in some weird flight pattern… pic.twitter.com/a1uMYGcb5l

Don’t buy into the propaganda… Notice the little “Q” above.