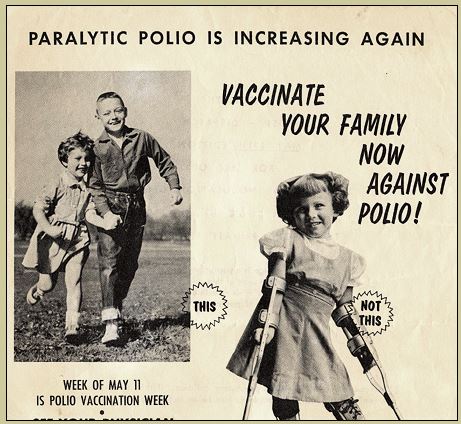 (Natural News) A common retort from vaccine advocates whenever healthy skepticism is expressed against vaccination is that were it not for the jabs, we would still be dealing with epidemics of things like polio. But is this actually true?

Forrest Maready, author of the book The Moth in the Iron Lung: A Biography of Polio, tells a much different story about polio that suggests it is not actually a contagious virus that can be vaccinated against, but is rather a set of symptoms caused by environmental contaminants.

While there was no pharmaceutical industry to speak of in 1789, a doctor at that time by the name of Michael Underwood first observed what he described as a “debility of the lower extremities” in children – or what many today would refer to as polio. Not knowing what it was, Underwood chalked it up to teething and foul bowels.

Several decades later, the situation worsened with increasingly more children developing this strange paralysis, usually in their legs. Despite still not knowing what it was, doctors gave it a name: poliomyelitis, with the word polio standing for “grey,” as in grey tissue, and myelitis standing for inflammation of the spinal cord.

“A poliomyelitis was a lesion on your spinal cord,” Maready explains. “You could have more than one of them. But they didn’t know why children had begun developing them, seemingly out of nowhere.”

Scientific tests later linked arsenic, a popular medical ingredient at the time, to paralysis of the hind legs. Mercury, another common metal used in infant teething products, was also linked to the disease.

Throughout most of the 1800s, poliomyelitis would pop up here and there in children but there were no major epidemics of it. Then in the 1890s, the first outbreaks of polio suddenly emerged right around the time that a new arsenate-based pesticide was introduced.

This chemical concoction, which was designed to fight off the gypsy moth, contained both lead and arsenic. It was sprayed all over the Northeast right before the first real epidemics of poliomyelitis first began to emerge in the United States – also, not surprisingly, in the Northeast.

Not only children but also horses, dogs, chickens, pigs and other animals suddenly started to develop similar symptoms and many of them died. The cause? Lesions in their spinal cords caused by, you guessed it: heavy metal-induced poliomyelitis.

“Vaccines” contain heavy metals that cause polio and other diseases

It is important to note that polio as modern medicine defines it does not infect animals. So how, then, did animals “catch” and die from it back in the late 1800s? The answer is that poliomyelitis is a metal toxicity disease, not a contagious viral disease.

Just like there is no such thing as a “covid” virus since SARS-CoV-2 has never actually been isolated, polio has not and cannot be pegged down as a specific infectious disease. Neither of these two illnesses meets Koch’s Postulates, either – meaning they have never been isolated and proven to exist as contagions.

“Koch’s Postulates were some research guidelines that basically stipulated there was a single causative microbe for every disease,” Maready explains.

The fact that polio is not a virus was further confirmed years later when it was discovered that many different things besides arsenic also caused poliomyelitis. One of them is “vaccines,” which we know contain all sorts of viruses, bacteria and other toxic materials that are injected directly into the body, bypassing its defenses.

What this suggests is that seemingly viral illnesses are either injected through vaccines or are caused by environmental pollution. There is no evidence to suggest that either polio or covid is a contagious virus that can be spread through the mouth or nose via airborne particulates.

Even so, the medical consensus is one that seeks to categorize these things as contagious diseases rather than symptoms caused by other factors. This false theory started to gain traction back in the 1800s and has since become the standard by which modern medicine gauges infectious diseases.

It is unfortunate that the practice of medicine went down this wrong path because millions have needlessly suffered, and many have died as a result. With polio, there was always one common denominator that was systematically overlooked as the cause, and that was environmental pesticides.

“I believe ingested pesticides, known to cause cellular membrane dysfunction, created a path directly from the intestines to the bottom of the spinal cord, located directly behind, for the viruses and bacteria to take hold,” Maready says, noting that polio almost always affected young children the worst, and nearly always in the same lower part of their spinal cord right behind their intestines.

“This is why multiple viruses (poliovirus, coxsackievirus, echovirus, etc.) all began paralyzing children around this time. It wasn’t a genetic mutation. It wasn’t sanitation improvements. It was a physical alteration of the gut integrity by pesticides.”

Maready’s thesis also explains why older people are not nearly as at-risk for polio compared to younger children. As a person grows older, the positioning of the spinal cord in relation to the intestines moves apart, decreasing the risk of the gray matter of the spinal cord getting infected and inflamed.

“This is why the injected Salk polio vaccine worked so poorly,” Maready further explains.