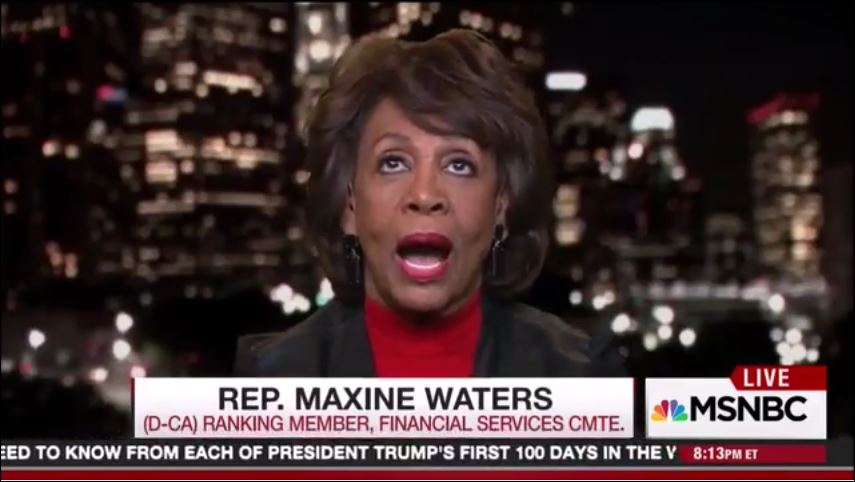 “When you attack a Black woman for speaking out about injustice, and when you call for ‘civility’ in the face of blatant racism, you invoke a long history of white supremacist power.”

So reads a letter in defense of the call by Rep. Maxine Waters to harass Trump administration officials.

“The concept of respect is culturally mediated; there is no single, objective standard,” it concludes.

There are clear objective standards. They include not harassing the people you disagree with in their private lives. The only people who think that standard is “culturally mediated” are leftist thugs.

But the lefty letter, which claims thousands of signatories, is not unique. Nor is its message.

A New York Times op-ed declares that civility is the “misguided obsession” of “white America.” According to a CNN analysis, not being harassed while you’re having dinner is a form of “privilege”.

“Civility is a tool of white supremacy,” a Samantha Bee writer tweeted.

According to Simran Jeet Singh, a Henry R. Luce Post-Doctoral Fellow at NYU’s Center for Religion and Media, civility is a “power play by those who feel that white supremacy is under threat.”

If civility and manners are racist, then rudeness must be the new civil rights movement. But no amount of citing Martin Luther King in defense of harassing Trump staffers having dinner will change his speech to, “I have a dream that my four little children will one day be rude, obnoxious and entitled snowflakes.”

Civility arguments predate the recent harassment of Trump officials. After being battle tested in online leftist forums where calls for politeness were denounced as “tone-policing,” they were deployed to college campuses where critics of racist harassment were attacked for imposing a “white -informed civility” on furious protesters.

Two sets of values were in collision. On one side were the basic norms of public behavior, and on the other was the great bigoted crusade against bigotry. It was inevitable that the norms of manners, decency and civility – like everything else that obstructed the great crusade – would be deemed racist.

White supremacy has been redefined as anything that interferes with the left. Beyond civility, the rule of law, equality, due process and freedom of speech have all been deemed the tools of white supremacy.

Racism is the new witchcraft. Just like witches, it’s everywhere and in everything.

“Milk, it has been argued of late, is the new symbol of white supremacy in America, owing to its hue,” the Los Angeles Times discourses. At the University of Michigan, wood paneling was accused of marginalizing minorities. In Oakland, racist scooters are threatening the lives of black people. “Mathematics itself operates as Whiteness,” a University of Illinois professor claimed.

Are civility, manners and decency racist? As much as milk, wood paneling, math and scooters.

And the black people who show up are taking part in a Marxist minstrel show.

Rep. Maxine Waters hoarsely urged a mob, “If you see anybody from that Cabinet in a restaurant, in a department store, at a gasoline station, you get out and you create a crowd. And you push back on them. And you tell them they’re not welcome anymore, anywhere.”

But on the video, the mob being hectored by the world’s oldest millennial is a sea of white.

Aside from Waters, there is one other black person in front of the camera. The rest appear to be mostly older white people from the upper middle class who look like they just stepped out of a mall. Their clothes run to business casual. It’s as far from a crowd of oppressed minorities as you can get.

But that’s typical for Waters whose phony #resistance shtick is sucker bait for angry white lefties who, like the political dumpster diva, are far away from her minority district. Racializing Waters’ call to white lefties to terrorize political opponents is typical of how the left uses minorities to justify its violence.

Dozens of media spin pieces tried to cite Martin Luther King to justify Waters’ rhetoric. That’s not civil rights. It’s political blackface. The issue isn’t race, it’s ideology. The left manufactures a crisis to create a sense of urgency. The norms, legal and social, cannot be allowed to get in the way of the urgent crisis. The petty preoccupations of the bourgeoisie with manners, property, legal rights or their lives can’t be allowed to interfere.

With this same tediously murderous logic, the left took millions of lives in the name of its urgent crises.

Civility and manners aren’t racist, but they are counterrevolutionary. Revolutions kill by urgency. They upend everything, declare an endless national crisis and settle down to solving it with decades of genocide. And there’s no room for civility or manners when your jackboots are full of blood.

Otherwise the rhetoric, the predatory crocodile tears for the oppressed, the violent outrage that purports to be rooted in political empathy, when it’s actually based on personal ego, the calls for violence on the behalf of the empathy props, is the same. The left pretends that its hatred is empathy, and the empathy of those who still believe in social norms is actually a form of cruelty.

If you don’t believe in terrorizing those you disagree with, where is your compassion for others?

Political blackface needs its Marxist minstrel show radicals. Auntie Maxine hoarsely bellowing at the population of a Gap store is as silly as anything from the Madea movies. It’s hard to believe that Rep. Maxine Waters (D – Anywhere But Her District) isn’t just a character that Tyler Perry invented.

Maxine Waters, who doesn’t care about anything that doesn’t involve her husband’s bank, is a pretext for white lefties to attack white conservatives in the name of civil rights. Despite winning elections by 70% margins, she’s raised $707,986. Waters doesn’t need the cash to win her inevitable elections.

When you hide your thuggery behind black people, you can denounce civility as a racist conspiracy against black people. But civility isn’t racist. White lefties wearing political blackface to claim that black people are physically incapable of having manners or conducting civil protests are as racist as it gets.

Political blackface is racist. And political violence by any race is terrorism. And a crime.

Civility isn’t racist. The left is.