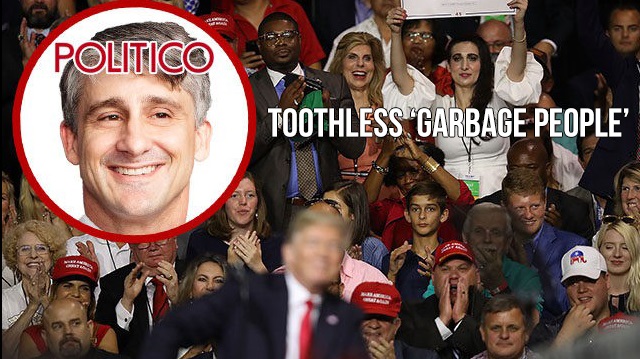 CNN Chief White House Correspondent Jim Acosta tweeted footage of being jeered by Trump supporters and claimed to be “very worried that the hostility whipped up by Trump and some in conservative media will result in somebody getting hurt.” Reacting to Acosta’s remarks, Caputo mocked the appearance of Trump rallygoers. “If you put everyone’s mouths together in this video, you’d get a full set of teeth,” he wrote.

When the insult sparked swift backlash, Caputo became defensive and condemned his critics for not being more outraged by the crowd’s treatment of Acosta. “Oh I like a good joke…that was just at the expense of others, which I think isn’t quite so funny. Not your best tweet, Marc,” one Twitter user said. “Oh, no!” Caputo replied. “I made fun of garbage people jeering at another person as they falsely accused him of lying and flipped him off. Someone fetch a fainting couch.”

I need to apologize for tweeting caustic remarks after seeing a reporter berated & abused. Hate begets hate. My comments referred ONLY to those jeering and swearing at the man, not a broad swath of people. But the fault is mine for causing confusion and feeding anger. 1/3

In the age of social media, where divisiveness serves no decent purpose, these flippant comments on my part only made things worse and contributed to a cycle of rage that I should not have inflamed further. So I'm sorry. 2/3

While it’s usually a good idea to just delete tweets that are wrong, I own this and the criticism (both accurate and misleading) that has followed. I'll do better. Here they are: 3/3 pic.twitter.com/G2rZrHjYWb

In case you’re wondering, this is how this all works: