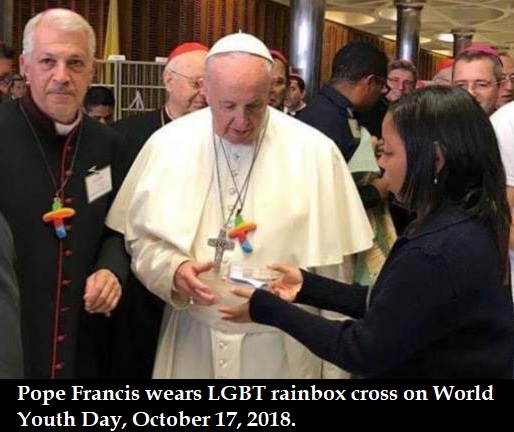 I thought the Catholic Church, like other religions, have tax-exempt status so long as the clergy refrain from politics and making political pronouncements.

Not only do some priests and deacons violate that rule, Pope Francis clearly exempts himself from that rule as well.

Not only has Jorge Bergoglio, his real name, made comments that are political in nature, he calls people who are critical of homosexuals “Hitler”. Pope Francis also compares President Trump to the homicidal tyrant King Herod who, in an attempt to kill baby Jesus, gave orders to kill all 2-year-old and younger male babies in Bethlehem and its vicinity (the Massacre of the Innocents in the New Testament). But Bergoglio doesn’t have the integrity or guts to actually name Trump, although it is obvious his target is Trump.

According to BreakingIsraelNews, La Civilta Cattolica reported on Dec. 6, 2019 that while visiting Thailand, in an oblique reference to President Trump’s policies on the southern border, Pope Francis compared the policy of building border walls and refugee detention centers to the acts of King Herod. The pope said: “In other parts, there are walls that even separate children from parents. Herod comes to mind. Yet for drugs, there’s no wall to keep them out.”

Earlier, on Nov. 15, 2019 at the 20th World Congress of the International Association of Criminal Law in Rome, Pope Francis called “goverment leaders” who oppose homosexuality Hitler-like.

“It is not coincidental that at times there is a resurgence of symbols typical of Nazism. And I must confess to you that when I hear a speech (by) someone responsible for order or for a government, I think of speeches by Hitler in 1934, 1936. With the persecution of Jews, gypsies, and people with homosexual tendencies, today these actions are typical (and) represent ‘par excellence’ a culture of waste and hate. That is what was done in those days and today it is happening again.”

Although the Pope made his remarks in his “typically ambiguous” way “without specifying any particular politicians, movements, or regions,” the news media understood those remarks as a broad criticism of politicians who oppose the homosexual agenda. As an example, Reuters ran the headline, “Pope compares politicians who rage against gays to Hitler,” and cites as an example Brazilian President Jair Bolsonaro, who told an interviewer he would rather have a dead son than a gay son.

LifeSiteNews‘ Freiburger points out that “While left-wing activists often compare conservatives and Christians to Nazis for their views on issues such as homosexuality, the Nazi regime in fact sought to supplant Christianity, and its persecution of homosexuals came from its views on Aryan population growth, not out of any Christian understanding of the nature of sex and sin.”

Freiburger also notes that “given the pope’s broader record on LGBT issues, his remarks may extend to world leaders who merely express disapproval of homosexuality and oppose the LGBT agenda.” Freiburger cites the following as pointing to Pope Francis’ partiality toward homosexuals: