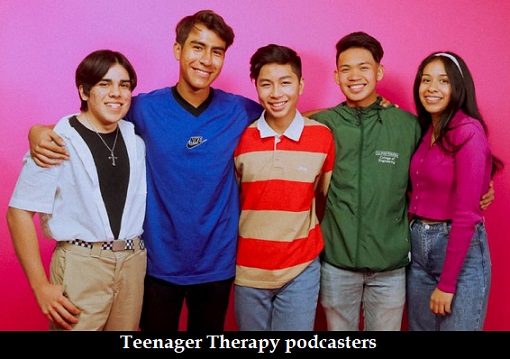 In “High Schoolers Across the Country Are Seeking ‘Teenager Therapy’,” Taylor Lorenz of the NYT calls Teenager Therapy “a lifeline for kids and a breakout hit” as “the coronavirus pandemic has upended school, summer plans and daily life for millions of teenagers” so that many are turning to the Teenager Therapy podcast to cope.

According to Jason Parham of Wired, the podcast has 360,000 subscribers, 2.2 million streams, and 1.5 million downloads. Parham glowingly describes Teenager Therapy as “In the desert of ignored teen emotions, five high school podcasters have become a go-to resource on everything from dating to depression.”

Always hunting for another gullible audience for their “woked” tripe, Meghan Markle and Prince Harry recently sought out Teenager Therapy for a Zoom “conversation” — heady stuff for the 16 and 17-year-old podcasters.

Given the podcast’s popularity among American children and teens, parents should know that Teenager Therapy is satanic.

Below is a tweet by Teenager Therapy which has since been deleted, but not before alert netizens took notice and saved it. As you can see for yourself, in the tweet, Teenager Therapy calls on Lucifer, aka Satan or the Devil, to “smite” (df: inflict a heavy blow on someone with the hand, a tool, or a weapon) their enemy or critic.

Isn’t it interesting that this is a group with whom Meghan Markle and Prince Harry have associated themselves?