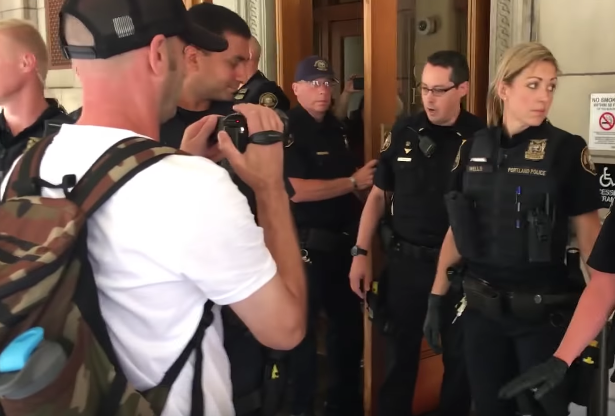 Alt-left activists who stormed Portland City Hall on Wednesday to take a stand against police brutality found themselves in a violent scuffle of their own which resulted in several arrests and injuries.

During the aggressive confrontation, Mayor Ted Wheeler and others were forced to walk out of a scheduled meeting and find a more secure conference room in which no one was allowed to enter and two security guards suffered minor injuries from the conflict as reported by KTVZ 21.

“One demonstrator, who was masked and wearing a baseball helmet, smashed a security guard over the head repeatedly with a megaphone. The guard was seen afterward clutching a bag of ice, a bruise beginning to form on his cheek.,” The Oregonian reported. “City Hall security chief Dorothy Elmore said she was also struck by a protester, in the arm.”

Foul-mouthed activists could be heard yelling “F–you, F–you” at city officials who were brave enough to greet them at the building’s entrance.

This all comes after a number of the ANTIFA-type communists were rounded up by the department during recent protests.