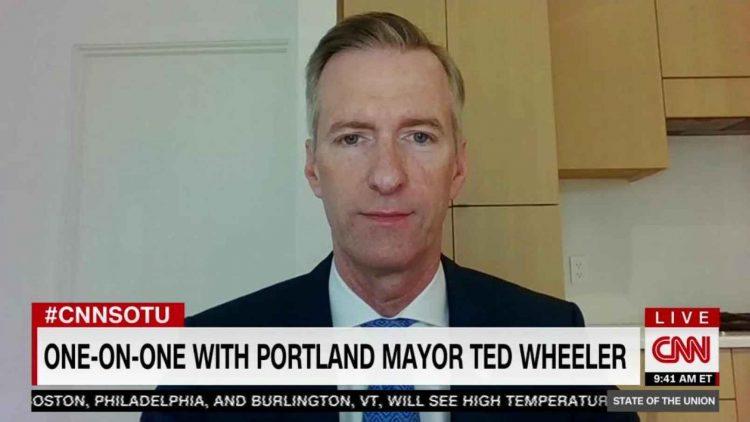 You can at least, on some level, respect an actual radical as a worthwhile enemy. But the Democrat cutouts for the radicals are pathetic and despicable figures, weak and dishonest, lying to us and to themselves at the same time, and the first to fall once the extremists they prop up turn on them.

That’s happened to Mayor Wheeler in Portland, but he’s still going to prop up the thugs who came after him because it’s what his political movement is now.

The top U.S. prosecutor in Oregon on Wednesday rejected a request from Portland’s mayor to end the federal deputation of dozens of police officers as part of the response to ongoing protests, saying it was the only way to end “lawlessness.”

In a joint statement, U.S. Attorney for Oregon Billy J. Williams and Russ Berger, the U.S. Marshal in the state, swatted down Mayor Ted Wheeler’s request and called him out for a “lack of leadership” that they said has allowed acts of violence to overshadow more than four months of nearly nightly protests since the death of George Floyd.

Portland and Oregon officers were deputized because it was the only way to get them to show up, particularly Oregon State cops, when the Black Lives Matter thugs that were assaulting them were getting a free pass.

Mayor Wheeler would like to go back to the free pass.

“A key feature of the designation is that anyone who assaults a federally deputized official could be subject to federal charges,” Wheeler’s statement said. “Fortunately, I am confident the Multnomah County district attorney will continue to prosecute anyone who assaults or otherwise harms police officers or others.”

The officers aren’t. And they have good reason not to be.

Oregon State Police are backing out of an agreement to protect the Portland federal courthouse from rioters, after the Multnomah County district attorney announced he will not prosecute most rioters who are arrested, National Review reported.

Multnomah County D.A. Mike Schmidt announced on Tuesday that his office would not prosecute most rioters who have been arrested, except where charges include deliberate property damage, theft, or threat of violence. Police have arrested over 500 people since the riots began, but less than 50 have been prosecuted so far.

This is why the DOJ had to take this extraordinary step.