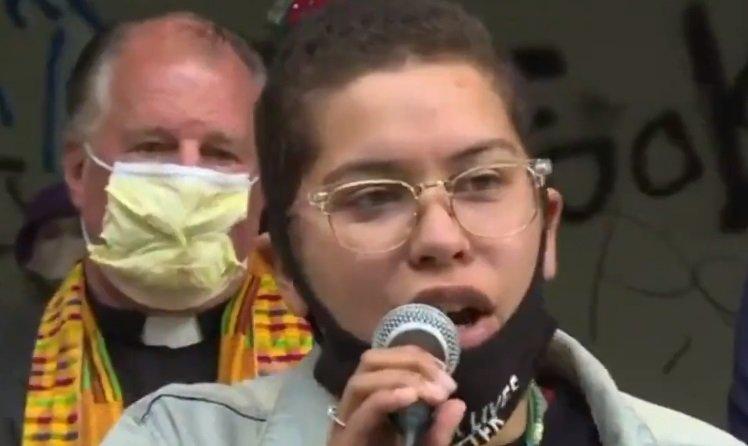 It’s not like we haven’t been saying this is what these people are all about, and look, you don’t have to wait for a Joe Biden or Hillary Clinton presidency to see it taking place. It’s happening under the Trump administration. This riot organizer in Portland, Oregon isn’t being arrested. She’s being allowed to invite the people to insurrection with clear and unadulterated treason on her lips.

A Portland riot organizer gained massive applause after saying that their mission is the “abolition of the United States as we know it” and referred to our nation as “stolen land.”

Lilth Sinclair could barely contain her excitement at the cheers when she announced herself as an “Afro indigenous non-binary” protest organizer on Friday.

During her speech, she said that she is working towards “not just the abolition of the police state, but also the United States as we know it.”

She went on to claim they were standing on “stolen land,” which of course is not the case. The land was conquered and purchased.

Following her speech, rioters violently attempted to barricade federal officers inside the Portland Federal Courthouse and Justice Center while launching explosives at the building. They also allegedly tied a man to a fence and beat him and held a street preacher at gun point before brutalizing him and physically removing him from their protest, according to a witness at the scene who spoke to livestreamers.

Liberals and some of the more media-focused organizers have repeatedly claimed that the Black Lives Matter riots’ goal is simply to end police brutality, while most of us knew that wasn’t these Marxists only agenda. This woman just let the mask slip on what those of us paying attention already knew.

There have now been 50 straight nights of rioting in Portland.

To be fair, the only land stolen has been by the feds in taking land they did not acquire constitutionally and I’m all for the people taking it back. I’m also against the militarization of the police. It’s not their job to be the military. That’s actually the citizen militia’s job, and they are to enforce the law as well, under our Constitution.

Constitutional Militia 2.0 – Restoring The Real Law Enforcement Of The People

The Citizen’s Grand Jury: The Power Of The People To Render Justice

The question that should be asked of this young woman is what kind of America is she looking for? Is it a return to a constitutional Republic with a foundation of the Bible? Then I would support that, but one has to wonder if what she is really after is more socialism, more communism and more tyranny.