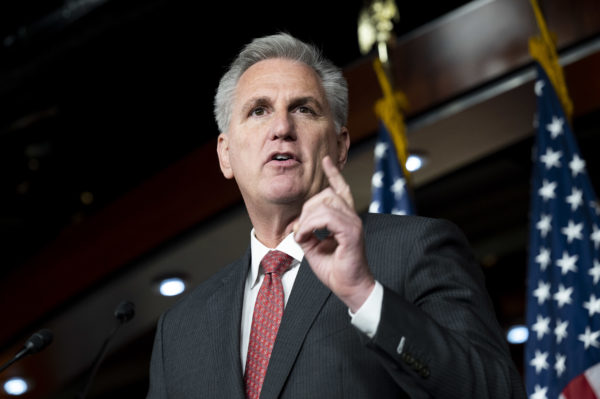 House Minority Leader Kevin McCarthy (R-CA) would presumably become the next Speaker. Rep. McCarthy is no profile in courage. He was part of the collective eruption of guilt over the Tulsa riot of 100 years ago, said the GOP is not the party of “nativist dog whistles,” and has a weak record on immigration, probably because of agricultural interests in his district. He talked at length about the GOP’s new “Commitment to America” to Breitbart; there’s not much in it for us. It doesn’t mention race, except for congressional races. If you’re a white American fed up with your government making you a second-class citizen, you’ve come to the wrong place. To be overly fair, Rep. McCarthy says some good things. He says he wants to “clean up” voter rolls. He asks whether Americans want “this one-party rule that’s brought us inflation, open borders, unsafe communities, and a supply chain where products are scarce” or “something that’s going to make our economy stronger, our streets safer, our border secure, and [ensure that] the next century [is] the American century.” Rep. McCarthy also promises a “parents’ bill of rights” and lauds the election in Virginia, in which parents’ anger over Critical Race Theory in schools drove a Republican upset victory. Attacks on critical race theory, immigration, and crime are all good.

These issues are what Americans want to talk about. The Virginia election proved that. A new poll found that Americans say immigration is more important than climate change, education, and foreign policy (even after the Afghanistan defeat.). It trails only the economy (the GOP has the advantage by default) and the pandemic (President Biden has not only failed to stop the disease but seems to have given up.)

But the plan doesn’t give us much. In its “one page” summary, “The Commitment to America” pledges that once in power the GOP will be “upholding free speech” and will “secure our border, and enforce our immigration laws.” Will huge numbers of illegals be deported? There’s no mention of affirmative action.

The GOP’s “Commitment to America” website has lots of tweets and complaints but few ideas. It shows the scope of President Biden’s failure on border security and crime but doesn’t say what Republicans would do. The “American Security” Task Force claims Republicans “do have a strategy to end Biden’s Border Crisis,” but doesn’t say what it is. Kevin McCarthy’s website offers a few more specifics and links to specific bills. He pledges to increase police funding for by $1.75 billion.

“Free speech is being challenged by big tech companies that give preference to one point of view but suppress another,” says the website. Earlier this month Rep. McCarthy said that big tech platforms “should not be allowed to use the shield of Section 230” because they are acting as publishers when they censor lawful points of view. The Republican “Task Force” on Big Tech Censorship and Data says, “It is time to scrap Section 230 and start over.”

Ending Section 230 of the Communications Decency Act is not a solution. Scrapping it would mean that sites such as Facebook and Twitter would be treated as publishers rather than platforms and thus be open to litigation if a user posts defamation, advertises illegal activity, releases damaging private information., etc. This would be an excuse to censor even more.

Also, huge corporations can police content far more easily than smaller companies. Andrew Torba of Gab, perhaps the most censored and canceled corporation in history, argues that Section 230 should be kept “exactly the way it is” because it “helps the little guy.” Given our own experience suing a tech company, lawyers and courts are not a solution. Abolishing Section 230 may be the worst of both worlds. It would create the illusion of action against Big Tech while crushing small tech. Will Chamberlain of Human Events had the right approach when he argued that “Platform Access Is A Civil Right.” He says, correctly, that the federal government helped create many of these major social media companies and that the Civil Rights Act of 1964 means that the “private property” argument does not justify discrimination: “We, as a society, do not have to allow private companies to violate Americans’ civil rights.”

Kevin McCarthy’s plan is to make tech companies “implement and maintain a reasonable user-friendly appeals process,” which will somehow “empower conservatives and others whose speech rights have been infringed to challenge Big Tech’s attacks.” This would leave things in the hands of Big Tech and/or the legal system. He also has alluded vaguely to antitrust action, but the Biden Administration is doing this anyway.

What can we expect from a Republican majority? Judging from the House GOP’s blog posts, the Republicans are mad at President Biden for not being sufficiently anti-Russian or spending enough money on Capitol Police. Still, an investigation into the events of January 6 might be fruitful. Even as this is written, the mysterious “Ray Epps” is trending on Twitter while “fact checkers” assure us he wasn’t working for the government. Senator Ted Cruz even brought up this “conspiracy theory” in a recent hearing, though he has called January 6, 2021 a “terrorist attack.” The GOP can’t seem to decide if the riot was a terrorist attack, a “fedsurrection,” or no big deal.

What would a Republican majority do? Limit FBI power as the Church Committee limited CIA power? Will all immigration laws be enforced? Will Big Tech censorship end? Since the Republican Revolution of 1994, the GOP has been trying to repeat the magic of the “Contract With America.” However, the Contract With America’s brilliance was its simplicity and clarity. Republicans promised to pass specific laws. Instead, “The Commitment With America” gives us cute sloganeering: “We fight to Restore, Rebuild, Renew,” while the Democrats will “Defund, Destroy, Dismantle.”

Republicans may take Congress simply because Americans are disgusted with the Biden Administration, but the GOP won’t repair the damage. That’s the story of American politics since Nixon. Even when Republicans win, the country keeps moving left, especially on racial, cultural, and sexual issues. This is no surprise; the conservative movement is arguably dedicated to avoiding using government power.

Republicans offer rhetorical opposition. Democrats use power. They are preparing to use the national security state against whites. You may yet face prison or persecution because of your views. Whatever you think of them, what the federal government and private companies have done to Nick Fuentes or Laura Loomer is deeply disturbing. Laura Loomer and right wing groups assembled on Freedom Plaza in Washington D.C. on July 6, 2019 to ”Demand Free Speech.” Loomer has been banned by Facebook and Twitter for inciting hate and violence. (Credit Image: © Jeff Malet / Newscom via ZUMA Press)

Republicans have accepted leftist cultural victories rather than reverse them. We must tell them what we expect, or they don’t get our vote. Third parties such as the American Freedom Party or the National Justice Party may be “fringe,” but whites cannot survive another 50 years of winning at the ballot box but losing everywhere else.

White advocates on the vanguard must direct our fire against so-called conservatives who have failed us for so long, not just “liberals” and their media.

I want laws enforced equally, my race treated fairly, my country’s history and culture respected. Otherwise, we owe the party and government that is supposed to represent us no allegiance.

President Biden’s blundering may be the last opportunity to keep America together. If the Republican Party fails, have options: redraw boundaries within the Union, start new political movements, and, if necessary, go back to the way the United States was founded by starting a country of our own.

It’s dangerous when people who say they are your friends represent you but act like your enemies. Politics is the art of the possible, but if the GOP can’t even be counted to stand for white equality, voting Republican and hoping things will get better is pointless. Secession, proposing a monarchy, or declaring Nick Fuentes the pope are all more realistic.

There is a time limit before whites are reduced to a powerless minority. What is at stake is the survival of our nation, people, and civilization. If Kevin McCarthy doesn’t get that, he won’t help us. If no Republicans get that, then there is no reason to support the Party of Lincoln at all.

Mr. Hood is a staff writer for American Renaissance. He has been active in conservative groups in the US. You can follow him on Gab.