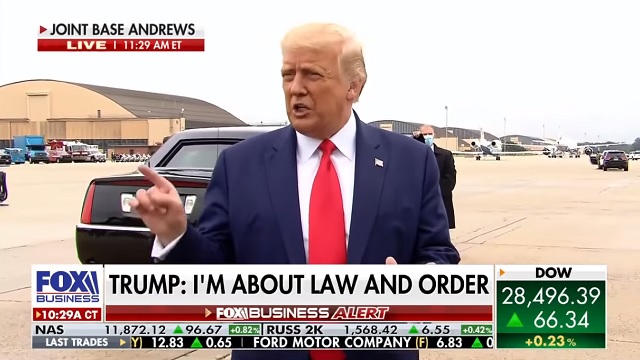 President Donald Trump on Tuesday called out the press for “fueling” the violence and rioting in cities across America and blasted them for refusing to cover the “targeted” killing of Aaron “Jay” Danielson at a pro-Trump rally in Portland on Saturday night.

Q Are you concerned at all by the armed militias on the streets? Are they a worry or are they to be applauded?

THE PRESIDENT: I think a lot of people are looking at what’s happening to these Democrat-run cities, and they’re disgusting. They see what’s going on, and they can’t believe this is taking place in our country. I can’t believe it either.

One of the reasons I’m making the trip today and going to Wisconsin is we’ve had such a big success in shutting down what would be, right now, a city — that would’ve been Kenosha — a city that would’ve been burnt to the ground by now. And we’re going to really say hello to law enforcement and the National Guard. And it all stopped immediately upon the National Guard’s arrival.

So, you know, it’d be easy to stop. I saw last night where these radical anarchists were trying to get into the mayor’s house, and lots of bad things were happening to this poor, foolish, very stupid mayor. I mean, how he could be mayor, I have no idea. But all he has to do is call and, within 10 minutes, their problem will be over.

As you know, they have to call us. They have to call and request help. All he has to do is call, and the problem will end. They had tremendous numbers of people, really, harassing him horribly, and, I guess, trying to break into his house. And he still sticks up with him because he’s a fool. Only a fool would stick up for them like that. These are anarchists. These are agitators. They’re rioters. They’re looters. They’re bad people. They’re burning down Portland. And you take a look at that. You take a look at the scenes last night. And then the fake-news media will say that they’re friendly protesters. Because you people — I’ll tell you, if we only had an honest press in this country, we’d be much more advanced. But we have a very dishonest press.

Yes. Any other questions?

Q Mr. President, can you speak at all — you’ve spoken a lot about the anarchy that you’re referring to. What about racial divisions? Would you like to bridge some of those gaps?

THE PRESIDENT: Yeah, I would. I would.

Q And do you think that anything that you’re saying is helping with that?

The press should be ashamed of themselves. I think the press is actually — the media is what’s fueling this, more so than even Biden, because Biden doesn’t know he’s alive. The press is really fueling this, and they’re fueling it horribly. And you’re doing a great disservice to your country.

When is the press going to take responsibility for the violence they’re inciting with their entirely phony fake oppression narrative?

(That’s rhetorical of course, the answer is never.)

When the message is being shouted from the highest and most powerful perches of society that white people are all racist, and black people are being “hunted” by them, we cannot be shocked to see these results. It was inevitable.

History tells us that casting any group of people as the villain, and telling other groups that the villain group is a direct threat to their existence, always leads to horrible things. Always. 100 percent of the time. And now we get to learn that lesson all over again.