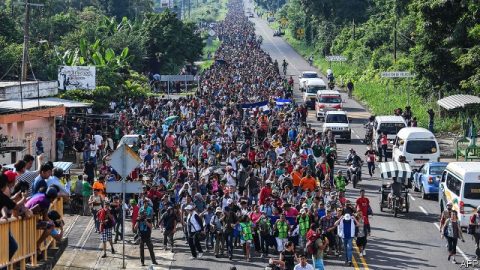 Breitbart reports that the new policy covers the “migrants” in the three caravans that are moving northwards, and all other migrants who cross the border illegally.

Officials indicated that President Trump will issue a proclamation today, and that the new rules will overhaul longstanding asylum laws. Once Trump makes a proclamation identifying who is barred, the new rule would be immediatelyapplied. Officials said “migrants” could apply for two other smaller programs that are much less likely to allow them to stay.

The denial of political asylum to those entering the U.S. illegally is sure to be challenged in court. Omar Jadwat, the director of the American Civil Liberties Union’s Immigrants’ Rights Project, said:

“The law is clear: people can apply for asylum whether or not they’re at a port of entry, and regardless of their immigration status. The president doesn’t get to ignore that law, even if he dislikes it.”

This is what the U.S. Citizenship and Immigration Services (USCIS) website says about asylum and refugee status:

Refugee status or asylum may be granted to people who have been persecuted or fear they will be persecuted on account of race, religion, nationality, and/or membership in a particular social group or political opinion.

Refugee status is a form of protection that may be granted to people who meet the definition of refugee and who are of special humanitarian concern to the United States. Refugees are generally people outside of their country who are unable or unwilling to return home because they fear serious harm. For a legal definition of refugee, see section 101(a)(42) of the Immigration and Nationality Act (INA).

You may seek a referral for refugee status only from outside of the United States. For more information about refugees, see the Refugees section.

Asylum status is a form of protection available to people who:

Every year people come to the United States seeking protection because they have suffered persecution or fear that they will suffer persecution due to:

What ACLU lawyer Jadwat does not address is that President Trump is invoking national security as the justification for barring illegal border-crossers from seeking political asylum.

Consistent with our immigration laws, the President has the broad authority to suspend or restrict the entry of aliens into the United States if he determines it to be in the national interest to do so. Today’s rule applies this important principle to aliens who violate such a suspension or restriction regarding the southern border imposed by the President by invoking an express authority provided by Congress to restrict eligibility for asylum. Our asylum system is overwhelmed with too many meritless asylum claims from aliens who place a tremendous burden on our resources, preventing us from being able to expeditiously grant asylum to those who truly deserve it.

Today, we are using the authority granted to us by Congressto bar aliens who violate a Presidential suspension of entry or other restriction from asylum eligibility.

According to new Department of Homeland Security (DHS) data, less than 10% of the migrants arriving at the U.S.-Mexico border from Central America have legitimate asylum claims. (Breitbart)