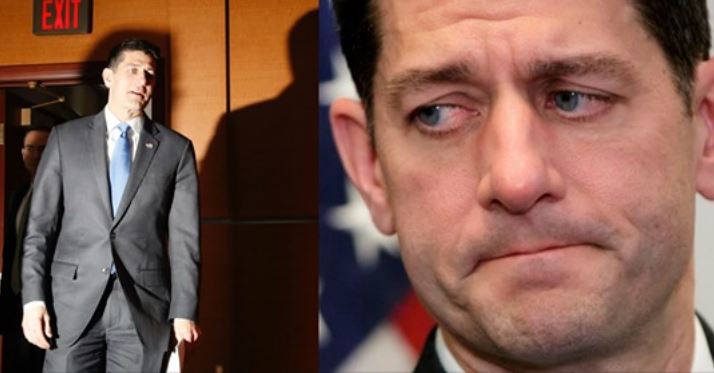 *This article was written when Republicans were in control of the House and it shows what a filthy scumbag Paul Ryan is.

Ever since Trump got into office, there’s been no shortage of RINO Republicans working in the shadows to bring him down. One of the most infamous anti-Trumpers to date has been House Speaker Paul Ryan, where this clown has been caught on numerous occasions plotting in the background to block Trump’s agenda. Now a secret tape of one of Paul Ryan’s private conversations has just surfaced, proving just what a snake this guy actually is.

Knowing that he’s the next in line for the presidency should Trump and Pence be removed from office, it now makes perfect sense why this idiot has been so opposed to Trump from day number 1. Now we have hardcore proof of what Paul Ryan has been plotting for months, thanks to this exclusive audio recording that was just released by Breitbart news.

In the private conference call that Paul Ryan had with House Republican members, he was very forthcoming with his anti-Trump agenda, telling the then-GOP presidential nominee Donald Trump forever and would never defend him ever again.

In the Oct. 10, 2016 call, from right after the Access Hollywood tape of Trump was leaked in the weeks leading up to the election, Ryan clearly he is done with Trump altogether.

“I am not going to defend Donald Trump—not now, not in the future,” Ryan says in the audio, obtained by Breitbart News and published here for the first time ever. But that’s just the beginning of Paul Ryan’s antics as you will soon see.

Now, Ryan—still the Speaker—has pushed now President Donald Trump to believe his healthcare legislation the American Health Care Act would repeal and replace Obamacare when it does not repeal Obamacare. Ryan has also, according to Trump ally Sen. Rand Paul (R-KY), misled President Trump into believing that Ryan’s bill can pass Congress. Paul and others believe the bill is dead on arrival in the U.S. Senate since a number of GOP senators have come out against it, and there are serious questions about whether it can pass the House. This is the first major initiative that Trump has worked on with Ryan—and the fact it is going so poorly calls into question whether Speaker Ryan, the GOP’s failed 2012 vice presidential nominee who barely supported Trump at all in 2016, really understands how Trump won and how to win in general.

The October conference call apparently was intended only for House Republican members. It’s unclear which or how many House Republicans took part in the call, whether the participants knew it was being recorded, who made the recording, or whether a recording exists of the entire call. The remarks on the portion provided to Breitbart News certainly sound like they were coming from Speaker Ryan, who seemed to be abandoning his party’s presidential nominee altogether just weeks before the election. He says not only will he not defend the Access Hollywood comments, but he will not campaign with Trump at all between this call on Oct. 10, 2016, and the general election for the presidency on Nov. 8—and that Ryan would not defend Trump on anything generally.

Ryan followed through on his promise to not campaign with Trump, abandoning the now president in the final crucial weeks leading up to the all-important general election. But Trump won anyway, in a landslide in the electoral college crushing Democrat Hillary Rodham Clinton. This audio file means that Trump won all 306 of his electoral votes on his own, without Ryan, including the 10 he won in Ryan’s home state of Wisconsin. As soon as Trump won without Ryan’s help, Ryan aligned himself with then President-elect Trump and now President Trump—acting like he never abandoned him on the campaign trail and never disinvited the president from a rally in his district.

Ryan’s comments on this Oct. 10 call came after a female voice—it’s unclear if the woman was a House member or not—opened up the call. He called Trump’s Access Hollywood comments indefensible and said they do not fit with the Republican Party’s “principles and values.” Ryan also told House members on the call that he would not be campaigning with Trump, and that each member should make their own decision with regards to Trump over the next several weeks at that point: Abandon the GOP nominee for president like Ryan was doing or stand with him? A number of members joined Ryan in abandoning Trump. Both of those two sections of the call have been previously reported in media, although those media reports lacked audio of Ryan to back them up. But the more important line is the line where Ryan says—without specifying this was about the Access Hollywood leak—that he will never defend Donald Trump again.

This audio tape’s release comes right on the heels of some more eyebrow-raising news this week, as we’re learning that Paul Ryan is now eyeing a presidential run to unseat Trump in 2020, as he will not seek another term as Speaker of The House. According to Gateway Pundit, Rep. Thomas Massie (R-KY) told the Fox Business Network Wednesday that he believes House Speaker Paul Ryan’s decision not to seek re-election is closely tied to his underlying presidential ambitions.

When asked why he thinks Ryan is bowing out, Massie replied, “My Kentucky gut says this man wants to be president and that he knows that after another term as Speaker and a few more omnibus bills like this, he will be wholly unsuitable to the Republican base to be president.”

As Jim Hoft of the Gateway Pundit reported, Speaker Paul Ryan announced on Wednesday that he will not seek re-election. Brendan Buck, Counselor to the Speaker, released the following statement

It’s pretty disgusting that Republicans had the House, Senate, and Presidency, and rather than getting some important legislation passed, they were too preoccupied opposing Trump’s agenda and being haters. It looks like Paul Ryan was more concerned with feeding his ego, which doesn’t come as much as a surprise considering he’s been part of the Swamp for quite some time.