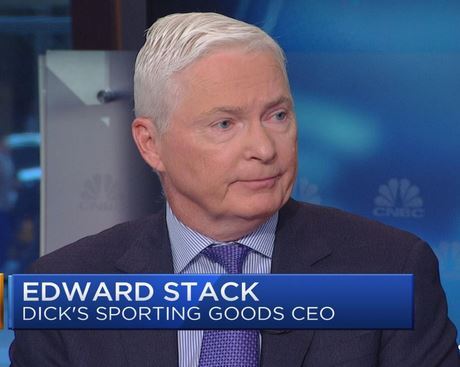 Actions have consequences, and Dick’s Sporting Goods is discovering what its gun-control virtue-signaling costs.

But Dick’s billionaire chairman and CEO doesn’t give a hoot.

Dick’s first modified its gun-sales policy in the wake of the Sandy Hook false-flag shooting, saying it would no longer sell AR-15s and certain other semiautomatic rifles.

But Dick’s quickly circumvented its pledge by opening its outdoor-focused Field & Stream chain.

After the mass shooting last February at the Marjory Stoneman Douglas High School in Parkland, Florida, Dick’s was one of the first businesses in the U.S. to clamber on board the ensuing “March for Our Lives” gun-control movement by declaring they would stop selling assault rifles and high-capacity magazines, bar the legal sale of guns to those under age 21, and hire their own gun-control lobbyists to push for stricter gun laws nationwide.

At the time, Dick’s paradoxically predicted that although the move could hurt sales, it would also draw more shoppers to its stores.

In August, Dick’s admitted that sales at stores open for at least 12 months tumbled by a bigger-than-expected 4% during the second quarter. But Chairman and CEO Edward W. Stack put on a brave face, insisting he was confident sales would turn around.

Alas, Dick’s drop in sales is continuing, such that the company may soon close down their entire Field & Stream chain of 35 stores across 18 states.

On September 15, 2018, Dick’s billionaire CEO Edward Stack, 64, told investors during the Goldman Sachs Retailing Conference that same-store sales dropped 3.9%, that its “decisions…on firearms” has hurt sales of its hunting and outdoors business, and that it may close its outdoor-focused Field & Stream stores.

“Well, we’ve made that decision at the end of February, what we’re going to do with firearms. And what we said is, we would not sell any of the assault-style rifles, we wouldn’t sell high-capacity magazines. We’d never sold bumps stocks which turn a semiautomatic weapon into basically an automatic weapon, and we wouldn’t sell firearms to anyone under 21 years of age.

So that’s in February. It’s still a little early to tell…. So we’ve had some vendors who’ve decided based on our decision to not sell the assault-style rifle that was used in the Parkland shooting that they wouldn’t sell us…any firearms anymore…. We’ve had some other people who’ve indicated that they wouldn’t shop with us any longer. So we’ve got to take a look and we’ll assess this through this holiday season, if the brands are going to continue to or not. Some brands are not going to continue to sell us. If consumers upset with us, we will make a decision of what we’re going to do with Field & Stream.

My sense is that we can either take a look at closing that store, that concept or reconceptualizing it into a more of an outdoor type concept and…as we move into the end of the fourth quarter, we’ll make a decision as to what we’re going to do.”

Having admitted that Dick’s gun-control stance has hurt sales, Stack whistles past the graveyard by entrenching even deeper in the company’s sales-losing policy. He said:

“We’ve made some decisions on firearms in the past and we’ve had a pretty good idea of what these consequences were going to be. We felt that was absolutely the right thing to do. We would do the same thing again if we had a mulligan so to speak to do it again. And but at the same time, our business has been pretty good….

So has it had an impact on the foot traffic and people who were upset with us on this? Yes.