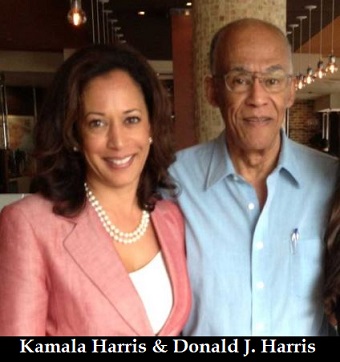 Freshman senator Kamala Harris (D-CA), 54, is a 2020 presidential aspirant who at age 31 and just fresh out of law school, “slept her way” into two lucrative state government jobs that paid her nearly half a million dollars in just 4 years.

Born in Oakland, California on October 20, 1964, Harris is neither a “natural born” U.S. citizen (defined as both parents being U.S. citizens at the time of her birth), nor she is African American. Kamala’s mother is a Tamil Indian who immigrated to the U.S. in 1960 from Madras, India. Kamala’s father, Donald J. Harris, came to the U.S. in 1961 from Jamaica, to attend graduate study in economics at the University of California, Berkeley. (Wikipedia)

Ever the political opportunist, on Feb. 11, 2019, Kamala told NYC 105.1 AM “Breakfast Club” radio show she would support reparations for “black people” because of slavery.

So it’s the height of irony that it turns out Kamala Harris is a direct descendant of a slave-owner!

That astonishing fact was revealed yesterday by Infowars‘ news director Rob Dew: Kamala’s paternal great-grandmother was the daughter of a Jamaican slave plantation owner who founded the city of Brown’s Town, Jamaica.

Dew’s source is impeccable — the information comes from Kamala’s father himself, who is a retired professor of economics at Stanford University.

As a child growing up in Jamaica, I often heard it said, by my parents and family friends: “memba whe yu cum fram”. To this day, I continue to retain the deep social awareness and strong sense of identity which that grassroots Jamaican philosophy fed in me. As a father, I naturally sought to develop the same sensibility in mytwo daughters. Born and bred in America, Kamala was the first in line to have it planted. Maya came two years later and had the advantage of an older sibling as mentor. It is for them to say truthfully now, not me, what if anything of value they carried from that early experience into adulthood. My one big regret is that they did not come to know very well the two most influential women in my life: “Miss Chrishy” and “Miss Iris” (as everybody called them). This is, in many ways, a story about these women and the heritage they gave us.

My roots go back, within my lifetime, to my paternal grandmother Miss Chrishy (née Christiana Brown, descendant of Hamilton Brown who is on record as plantation and slave owner and founder of Brown’s Town) and to my maternal grandmother Miss Iris (née Iris Finegan, farmer and educator, from Aenon Town and Inverness, ancestry unknown to me). The Harris name comes from my paternal grandfather Joseph Alexander Harris, land-owner and agricultural ‘produce’ exporter (mostly pimento or all-spice), who died in 1939 one year after I was born and is buried in the church yard of the magnificent Anglican Church which Hamilton Brown built in Brown’s Town (and where, as a child, I learned the catechism, was baptized and confirmed, and served as an acolyte).

Below is a picture of Kamala Harris’ paternal great-grandmother Miss Chrishy:

Donald Harris also denounces his daughter’s cynical use of identity politics, specifically Kamala attributing her smoking marijuana to her Jamaican heritage. On the same “Breakfast Club” radio show, Kamala was asked if she smoked marijuana, to which she flippantly replied: “Half my family’s from Jamaica. Are you kidding me?”

Below is Donald Harris’s statement to Jamaica Global, February 15, 2019:

My dear departed grandmothers (whose extraordinary legacy I described in a recent essay on this website), as well as my deceased parents, must be turning in their grave right now to see their family’s name, reputation and proud Jamaican identity being connected, in any way, jokingly or not with the fraudulent stereotype of a pot-smoking joy seeker and in the pursuit of identity politics. Speaking for myself and my immediate Jamaican family, we wish to categorically dissociate ourselves from this travesty.

Rush Limbaugh, on his radio show yesterday, asked his audience a curious question — whether Kamala Harris is beautiful. Here’s the transcript:

Limbaugh: “Do you think she’s beautiful? Kamala Harris, is she beautiful? I’d kind of rather ask other women those questions than render an opinion myself. There’s no winning that one, so…

Man, oh, man are the e-mails pouring in on my question of whether or not Kamala Harris is pretty or beautiful. Man, oh, man. Here is a sample: ‘I do not think Kamala is beautiful, but she’s not totally unfortunate, Mr. Limbaugh. She’s like Michelle O. On occasion, she can get her act together enough to look attractive.’

Man, it’s vicious out there. I’ve always known this. When women start weighing in on other women, it can get… It’s time to turn around, plug the ears, and forget that you hear what you hear.”

For Limbaugh to even raise the question whether his audience consider Kamala Harris to be “beautiful” suggests that many do. His allusion to women being “vicious” about other women implies that he thinks Kamala to be “beautiful” and that women who don’t are just being catty (“vicious”).