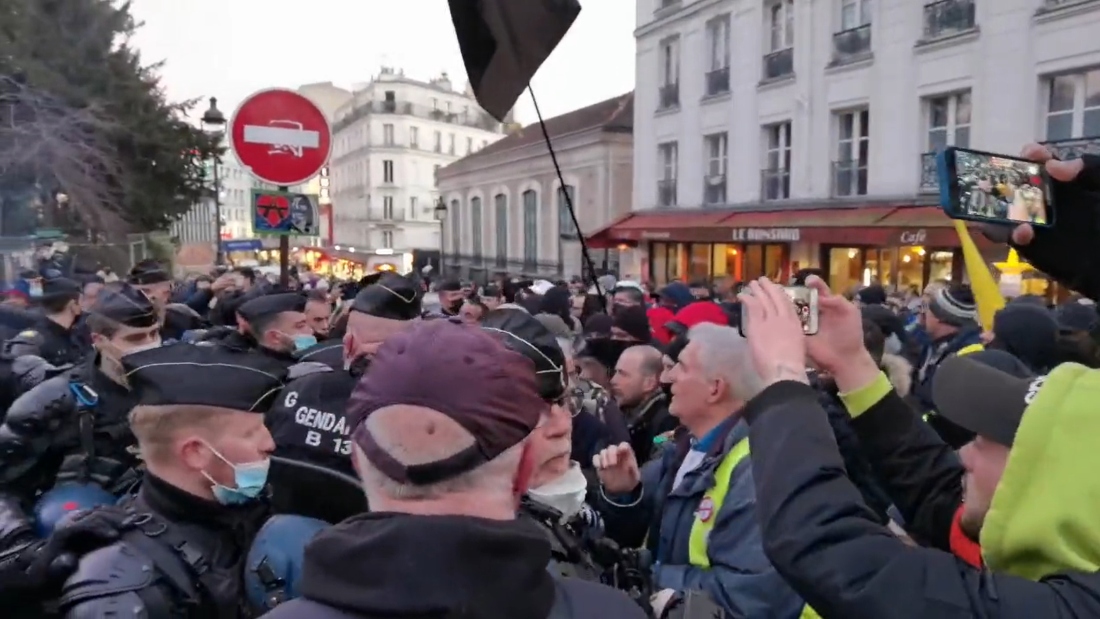 (Natural News) New video footage shows thousands of protesters in Paris surrounding the headquarters of Pfizer and chanting “Assassins!” as they express their opposition to the country’s controversial vaccine pass and mandates.

A large crowd can be seen in videos posted across social media, some wearing masks and some without, chanting and bearing signs in what appeared to be a peaceful protest.

Paris has been the site of ongoing protests over the country’s extreme COVID-19 measures, and the fires were stoked last month when the country’s president, Emmanuel Macron, admitted that part of his strategy for tackling the virus is to “piss off” people who are unvaccinated as much as he possibly can by restricting their freedoms in hopes of convincing them to get the risky jab.

Macron didn’t even attempt to be diplomatic about it, saying in an interview with Le Parisien, “As for the non-vaccinated, I really want to piss them off. And we will continue to do this, to the end. This is the strategy.”

These comments came after he had previously announced that people who do not have a COVID-19 passport will not be allowed to participate in such basic activities as using public transportation, going to shopping malls or eating in restaurants. In equally outrageous comments, the administrative director of Paris’s public hospital network, Martin Hirsch, said that unvaccinated citizens should not be allowed to access hospital care.

COVID-19 pass in France shuts unvaccinated people out of society

Last month, protests across the country against the introduction of a new COVID-19 pass that would essentially ban unvaccinated people from participating in public life attracted more than 100,000 people. The bill meant that people would no longer have the option of showing negative COVID-19 test results to access public venues; the only way to get inside would be full vaccination.

France is currently one of the most highly vaccinated European countries, with more than 90 percent of its population over the age of 12 and eligible for the shot now being fully vaccinated.

The country’s health minister, Olivier Veran, recently announced that the vaccine pass will remain in effect until hospitals can function normally and no longer need to cancel non-emergency procedures to accommodate COVID-19 patients. With around 3,700 COVID-19 patients in intensive care in the country, that point seems a long way off, however, with Veran suggesting the number would need to be closer to 1,000 before the pass could be abolished.

As long as no new dangerous variants emerge, he believes there could be some relief this summer. He said: “The vaccine pass will come to an end, and judging by current trends, it is likely that the end will come before the month of July.”

However, he also announced a slight easing of the restrictions, allowing those who have had one or two doses of the vaccine to access the pass as long as they have also recovered from the virus.

He claimed: “Scientists say that in order to benefit from the pass, one needs to have been exposed to the virus at least three times. This exposure can be by way of injection or infection” and include “at least one vaccine dose.”

Therefore, “those who have had one jab and two infections, or two jabs and one infection (…), or three injections, can benefit from the vaccine pass,” he added.

He also said that whether or not French people would be required to get another booster would depend on the emergence of further mutations of the virus. They have, however, lifted the mandate to wear masks outdoors.