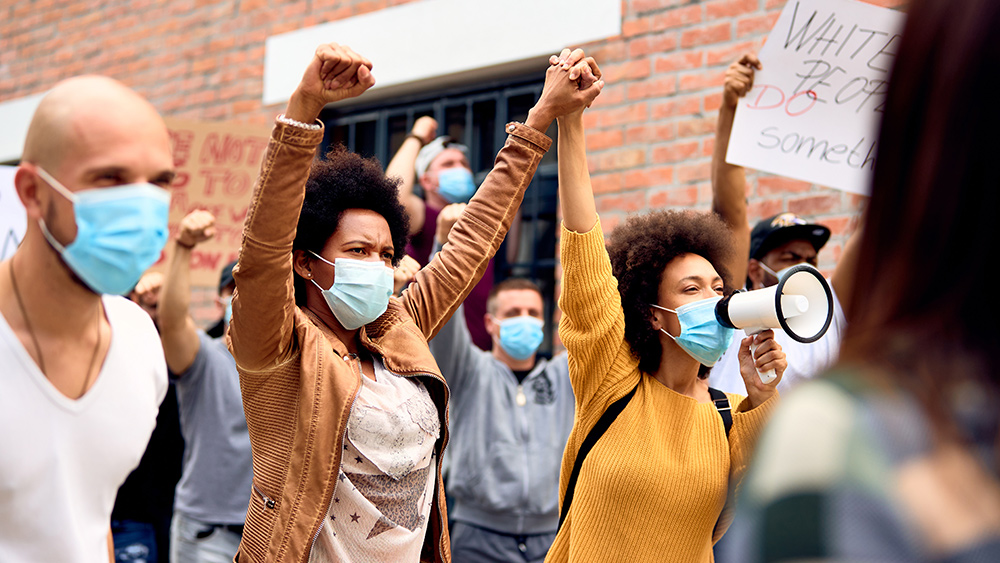 In Seattle, the police department – which on Friday announced that they would effectively not be enforcing the law due to a City Council ban on the use of non-lethal crowd control measures – declared a riot, citing “ongoing damage and public safety risks,” according to USA Today. 16 protesters were arrested by Seattle PD for assaulting officers, obstruction and failure to disperse. One officer was hospitalized with a leg injury caused by an explosive, while the crowd launched mortars and rocks at the police.

Crowd continues to throw/launch mortars and rocks at officers near 11/Pine. Police continue to make arrests and work to clear the area.

They are trying to retake the CHAZ https://t.co/IgOIP1LFOu

In Chicago, hundreds of protesters called for abolishing ICE and defunding the police, while chants of “Black women matter” and “Latino lives matter” could be heard.

Meanwhile, dozens of pro-police protesters gathered in Grant Park, where Mayor Lori Lightfoot removed a statue of Christopher Columbus on Friday morning before dawn. Attendees of the “Back the Blue” rally could be heard chanting “We love CPD,” as counter-protesters gathered across the street.

And In Louisville, tensions almost spilled over into violence as two opposing and heavily armed militia groups faced off within yards of each other downtown.

More than 300 members of the Atlanta-based Black militia NFAC, or “Not F**king Around Coalition” came to Louisville demanding justice for 26-year-old Breonna Taylor, an ER technician who was fatally shot by officers in March.

The group came close to 50 far-right “Three Percenter” militia members, who were also heavily armed. Police kept the sides apart and tensions eventually dissipated. Both militias had said they wanted to avoid violence.

Cries of “Black lives matter” were heard through downtown. One man yelled “Don’t fire unless you’re fired upon.” –USA Today

"Grandmaster Jay" of the NFAC led the march. Media swarmed around him, and he asked that they give him room.

When they didn't, he raised his rifle and said "I'm gonna shoot up in the air."

The media backed off. pic.twitter.com/lf24Fcm6NK

At one point gunshots erupted when one NFAC member accidentally shot three of his comrades.

BREAKING: We just watched two people be taken onto stretchers at Baxter square on 12th and Jefferson. Metro safe has confirmed reports of shootings & that there are multiple victims. We heard the noises when people scattered to get behind cars, & to take a knee @WHAS11 #nightteam pic.twitter.com/h5AsPWlLbi

#NFAC “Highly Trained” soldiers shoot each other by accident..oh yeah, and they want Texas.. pic.twitter.com/T11XMyDGtB

The Seattle Police Department announced on Friday that residents and business owners are essentially on their own, after the City Council banned the use of pepper spray and other ‘less lethal tools’ to disperse crowds.

“Simply put, the legislation gives officers NO ability to safely intercede to preserve property in the midst of a large, violent crowd,” reads a letter from Seattle Chief of Police, Carmen Best – who added that thanks to the City Council, “Seattle Police will have an adjusted deployment in response to any demonstrations this weekend.”

The Seattle police chief is sending out letters telling residents: "We cannot enforce the law. You are on your own." pic.twitter.com/89jyezSBMS

And in anticipation of violent weekend protests coordinated over social media platforms (which ban conservatives for mean words), Seattle business and police have been boarding up.

.@SeattlePD West Precinct, also SPD HQ, has boarded up their windows and brought in cement barriers to keep “peaceful” protesters from vandalizing and breaking-in. pic.twitter.com/WhMgKhYcpz

The Portland-based Pacific Northwest (PNW) Youth Liberation Front – which describes itself as a “decentralized network of autonomous youth collectives dedicated to direct action towards total liberation,” has issued a call to action for other Antifa cells across the country on Saturday – calling it “J25” (July 25).

In a Facebook ‘call to action,’ the anarchist group writes:

The Federal Government has already waged war against Portland, which has been protesting everyday for 50 days straight, and now feds are going to war against protesters everywhere in an attempt to take control and snuff out the fire of this uprising. We must become more powerful than them.

Meanwhile, Antifa protests are already heating up across the country after demonstrations began on Friday night:

This Antifa guy stabbed someone in Portland earlier this morning, prompting a police response and his arrest. pic.twitter.com/b0UBqnXJaX

Antifa militant and convicted pedophile David Blake Hampe was arrested in the early hours of Saturday following his alleged stabbing of a black Trump supporter in Portland.https://t.co/WqsB6OS1Xo

Another huge crowd tonight in Portland, including a new "wall" on the front lines: a Wall of Vets.

Here's a look at the line of military veterans getting set up here in front of the federal courthouse. Behind them, the Wall of Moms and the Wall of Dads are arriving. pic.twitter.com/gGnXHjI3k2

The feds come out shooting pic.twitter.com/oWQtx9crAR

“Fuck you I won’t do what you tell me” #portlandprotests day 58 pic.twitter.com/jLnySFSBdD