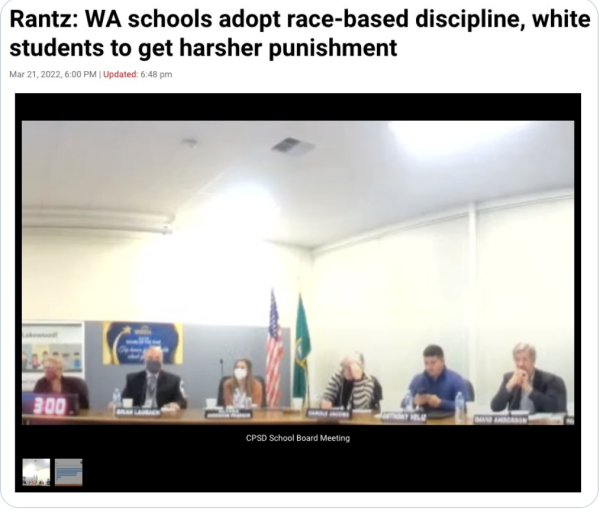 A Washington school board butted heads over a new student discipline policy that considers a student’s race before deciding on a punishment.

The Clover Park School District debated its new “culturally responsive” student discipline policy. It means student discipline would not be consistent based on conduct. Instead, a school considers a student’s race and background. It would likely offer harsher punishments to white students, even if the conduct is identical to that of a black or Hispanic student.

The disparate treatment is championed in the name of inclusion. But it’s not just a Clover Park School District controversy.

The Clover Park School Board adopted a revised student discipline policy at its March 14 meeting by a vote of 3-2. At times, the meeting was contentious as two board members argued it’s wrong to use race to determine punishment. The district is majority-minority, with 28% white students.

According to the policy, disruptive students may face “exclusionary as well as positive and supportive forms of discipline.” But the focus, the policy maintains, is to keep students in the classroom and provide “equitable educational opportunities.”

The state officially defines “culturally responsive” as “knowledge of student cultural histories and contexts, as well as family norms and values in different cultures; knowledge and skills in accessing community resources and community and parent outreach; and skills in adapting instruction to students’ experiences and identifying cultural contexts for individual students.”

In practice, it means favorable treatment of racial minorities.

The two conservative members of the Clover Park school board asked what is meant by the term culturally responsive discipline. Deputy superintendent Brian Laubach attempted to explain.

“Essentially they’re referring, there, that you look at ‘are you dispersing discipline across the ethnicities the racial groups equitably,’ right?,” Laubach said. “So, are you disciplining African-American boys more than you’re disciplining white boys, right? So, are you paying attention to all of that in your data?”

He continued by listing some specific data schools would need to compile on student discipline.

“What are their backgrounds? Ethnicity? That sort of thing can be commented in that way about it. Then, asking classroom teachers, asking administrators who dispense that discipline, you know, what brought that about over the other forms of discipline you used in your classroom to make a change happen before sending a kid out, perhaps, for a behavior violation,” Laubach said.

Conservative board member pushes back

Attempting to further explain the concept, board member Anthony Veliz offered a clumsy example of a student stealing a slice of pizza. Veliz argued that the student’s culture teaches that stealing is permitted.

“What if, you know, just saying, like, in my background, what if that type of rule that we broke was more acceptable at my house, right, versus your house?” Veliz said. “And, you know, when I’m talking to them, like, ‘hey, you know, what, actually, I thought I was okay, I thought it was fine to grab that piece of pizza before anybody else. Because in my house, I’m allowed to do that.’ Right?”

“Let’s say we both commit the same offense,” Wagemann explained. “Then the question should be what are the consequences of that offense? And how do we go through that process? That’s how I see it. And to be fair, if we both did the same thing, we should get the same consequence, the way I see it. And I think that’s how most children on the playground like to see it. Most of us as citizens in our community like to see it that way. That it’s equal.”

As the white population in America declines, the standards of civilization white people collectively created are nothing more than racist, with the rising tide of non-whites incapable of replicating them.

Thus, these standards are deemed racist.

How long until a law is passed to make it illegal for a white male to procreate with a white female? Isn’t the existence of white children anathema to the idea of inclusion?

The illegitimacy of our present system and the hostile nature of our anti-white elite becomes more terrifyingly obvious by the day.