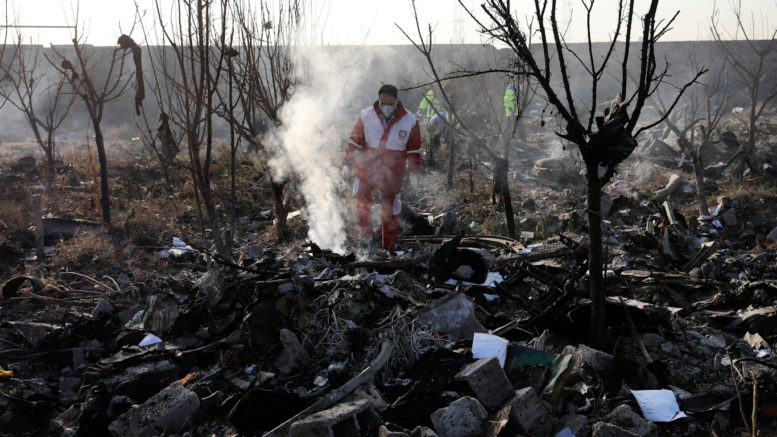 Kiev-bound Ukraine International Airlines Boeing 737-800 crashed shortly after takeoff from Tehran, Iran, early Wednesday morning, killing all 176 passengers and nine crew members on board. The head of the Red Crescent told Iranian news agency ISNA that it was “obviously impossible” that any passengers on flight PS-752 survived. A witness to the incident claimed that the pilot of the doomed vehicle courageously steered it out of the way of a residential area and towards a soccer field, crashing onto it and subsequently into a canal. Ukraine International Airlines said that the aircraft disappeared from radar screens a few minutes after takeoff. The winter’s light brought with it sobering images of the wreckage.

The crash comes at a point barely short of war between the United States and Iran, and brings back memories of the downing of Iran Air Flight 655 by an American Cruiser, the USS Vincennes, in July 1988. All 290 people aboard (including 66 children) were killed as a result, as it flew through a well-established air corridor between Tehran and Dubai. Although the U.S. Navy officially claims it mistook the jet for an enemy Tomcat fighter, two of the Vincennes officers received Legion of Merit medals for “meritorious service” upon arriving back in America. The ship had, at the time of the attack, illegally entered Iranian waters to perform what Ronald Reagan described as “a proper defensive action.” George H.W. Bush, Vice-President at the time, went further: “I will never apologize for the United States – I don’t care what the facts are… I’m not an apologise-for-America kind of guy,” he bluntly stated on the incident.

The head of Iran’s Civil Aviation Organization, Ali Abedzadeh, said, “We will not give the black boxes to the manufacturer (Boeing) and the Americans. It’s not yet clear which country the black box will go to for the investigation.”

While the Ukrainian embassy in Tehran had earlier “ruled out” the incident being an act of terror, it later retracted the statement, fueling fears that the event represented an escalation of hostilities between the U.S. and Iran.

On January 3, the Trump administration carried out a successful drone assassination attempt of Lt. General Qassem Soleimani. Soleimani was a charismatic and influential leader and statesman of the Islamic Republic, commonly considered one of the most powerful people after Ayatollah Khamenei.

A 2018 poll conducted by the University of Maryland found two-thirds of Iranians rated Soleimani “very favorably.” While the New York Times speculated that it was likely he “had come to Iraq in part to plot the next move against United States military personnel or civilians,” in reality, he had been invited to attend regional peace talks with Saudi Arabia by the Iraqi Prime Minister, who personally asked Trump for his blessing. Trump agreed, then used the opportunity to drone strike Soleimani on Iraqi soil.

Four hours before the airliner crashed, Iran fired 22 ballistic missiles at U.S.-occupied military bases in Iraq. A statement from the Islamic Revolutionary Guard Corps (IRGC) made it clear that this was in response to Soleimani’s assassination.

BREAKING: STATEMENT FROM IRGC:
"The brave soldiers of IRGC's aerospace unit have launched a successful attack with tens of ballistic missiles on Al Assad military base in the name of martyr Gen.Qasem Soleimani."#Iraq #Iran #AlAssadBase

Ukrainian Foreign Minister Vadym Prystaiko announced that 82 Iranians, 63 Canadians, 11 Ukrainians, 10 Swedes, four Afghanis, as well as three Germans and Britons were on board. The model of aircraft is a member of the same family as the currently downed 737 Max 8 model, which has recently seen two high-profile deadly incidents.

In October 2018, Lion Air Flight 610 crashed in Indonesia, killing 189 people. Just months later Ethiopian Airlines Flight 302 crashed, killing 157. Like today’s Iran catastrophe, both the other Boeings crashed just minutes after takeoff, leading to the Seattle-based company grounding all 737 Max 8’s. After investigation, it transpired that both 737 Max 8’s lacked optional “extra” safety features that likely would have saved them from their fate. The reason? Because Boeing charges airlines extra for them.

The Financial Times argued that Boeing was right to mark up and charge extra for safety features it itself conceded are “critical”, claiming that wanting these extras is a “naïve and foolhardy” wish, despite the fact that all safety features combined increase the price of a new plane by less than 0.1 percent of the $121 million a new 737 Max 8 costs. In a less well-known March 2019 incident, a 737 Max 8 traveling in March from Florida to California was forced to make an emergency landing. The plane was being ferried to a storage facility in Victorville, CA after the model was officially grounded.

The aircraft that crashed in Iran today was a three-year-old 737-800. Already under the microscope for its terrible safety record, Boeing will now face intense scrutiny after this latest tragedy. In a statement, the aviation giant sent its “heartfelt thoughts” to the victims’ families and said it was “ready to assist in any way needed.” Seeing as it is a major military contractor and given Trump’s aggressive moves towards Iran, it may be helping shoot down many more planes over Iran very soon.

This article was sourced from MintPress News.

Alan MacLeod is a Staff Writer for MintPress News. After completing his PhD in 2017 he published two books: Bad News From Venezuela: Twenty Years of Fake News and Misreporting and Propaganda in the Information Age: Still Manufacturing Consent. He has also contributed to Fairness and Accuracy in Reporting, The Guardian, Salon, The Grayzone, Jacobin Magazine, Common Dreams the American Herald Tribune and The Canary.