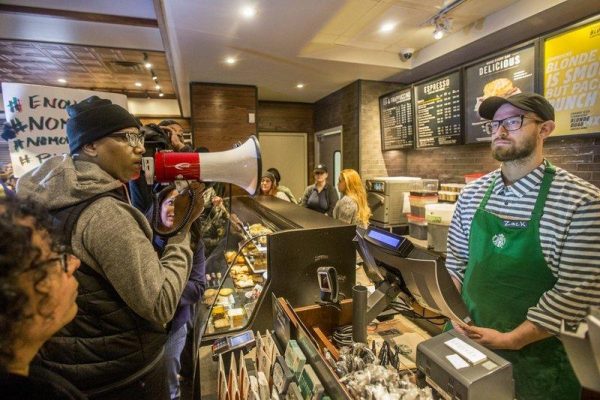 In 2015, Starbucks went completely Woke with “Race Together.”

Now, a company billing itself as a “window into America,” realizes Wokeness is breaking the nation. [Starbucks CEO: Progressive Cities ‘Have Abdicated Their Responsibility in Fighting Crime’, National Review, July 15, 2022]:

Howard Schultz, the CEO of Starbucks, suggested Wednesday that major U.S. cities and those managing their governments are neglecting the crime issue to the detriment of commerce and community safety.

“I must say, in my view at the local, state and federal level, these governments across the country and leaders, mayors and governors, city councils have abdicated their responsibility in fighting crime and addressing mental health,” Schultz reportedly said at an internal meeting, according to a video posted on Twitter.

The business leader’s remarks came after his company announced plans to permanently close 16 locations in five progressive U.S. cities, including six in Seattle, six in Los Angeles, two in Portland, one in Philadelphia, and one in Washington, D.C., by the end of the month due to repeated security disturbances. Such incidents included customers and other members of the public using drugs in the stores.

“I don’t have to spend too much time on what’s going on in the country and how America is becoming unsafe, but you all read the press release over the last couple of days that we are beginning to close stores that are not unprofitable,” Schultz lamented. “It has shocked me that one of the primary concerns that our retail partners have is their own personal safety.”

To help address the growing problem, Starbucks said it would help train baristas to handle active shooter situations and conflict deescalation at work, according to the Wall Street Journal. Store managers will also be authorized to close bathrooms, limit seating, or reduce operations.

In his speech, Schultz noted that Starbucks’ struggle to keep its store doors open in increasingly violent and volatile neighborhoods and metropolitan areas is a reflection of the national experience with the decline of law and order in recent years. If the crime rate continues to climb, Schultz implied that he will be forced to shut down more stores in more areas.

“Starbucks is a window into America, we have stores in every community, and we are facing things which the stores were not built for. . . . We’re listening to our people and closing stores, and this is just the beginning. There are going to be many more,” he said Wednesday.

President Biden and the Democratic Party have presided over an era of record crime that has been partly responsible large migrations out of progressive-dominated states such as California and New York into redder, Sunbelt states such as Florida and Texas.

Starbucks closing stores that aren’t unprofitable, but the cities where these stores are located are no longer safe for the individuals they employ.

We aren’t at the end of history. If Starbucks is a “window into America,” it’s obvious our nation is broken.

The only way to fix our nation is to be honest about who is breaking the country.

Race Together. From a triumphant, declarative statement to a question we all know must be answered.

Separation is the only way forward.