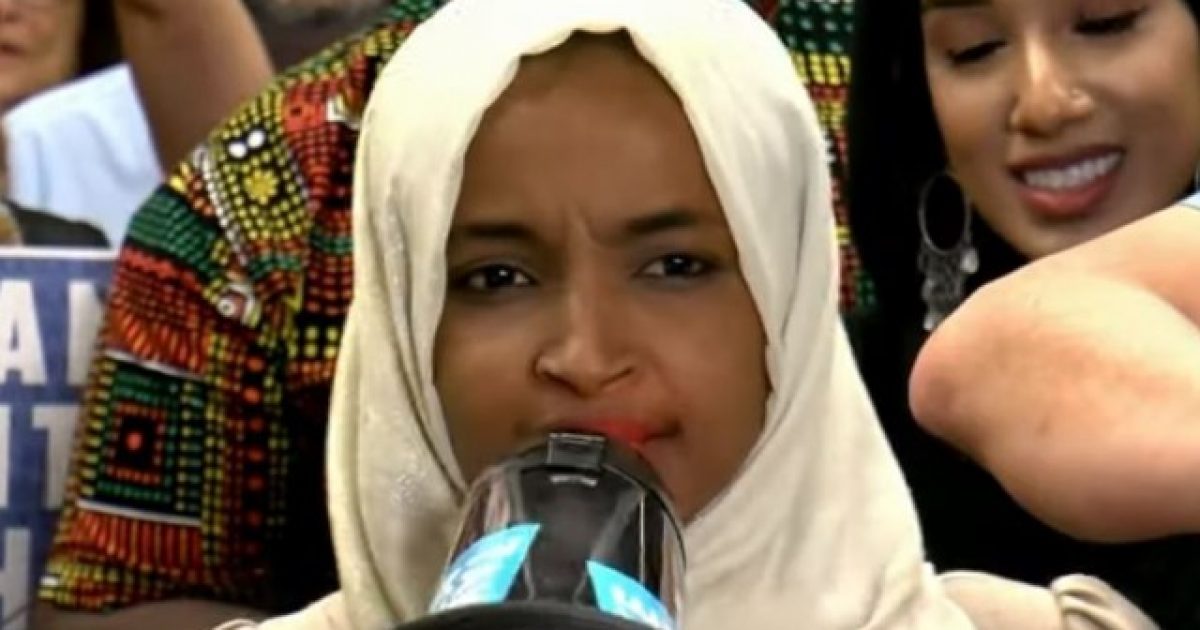 Conservative social media activist and journalist James Cheef, host of “The Cheef Report” podcast, said during an interview Friday that the anti-Americanism displayed by Rep. Ilhan Omar (D-Minn.) is “nothing new” given the wide support she has in her Somali community in Minnesota.

What’s more, Cheef said during an interview on the “Wayne Dupree Show,” her community sends home tens of millions of dollars each year, some of which winds up in the hands of the terrorist group Boko Haram.

Cheef said he knows this because he has spent years as an independent journalist covering Minnesota politics including Omar, even before she gained notoriety as a U.S. congresswoman and someone with distinct anti-U.S. and anti-Semitic attitudes.

During a discussion with Dupree about President Donald Trump’s North Carolina rally in which many in the crowd were shouting, “Send her back!” — a reference to Omar, Rashid Tlaib, Ayanna Pressley, and Alexandria Ocasio-Cortez — Cheef noted that the things they, and especially Omar, have said about our country are nothing new.

“None of this surprises me,” Cheef began. “I spent about two years reporting on Minnesota, and this was before anyone even knew of Ilhan Omar. I didn’t even know who she was.

“If people don’t like what Ilhan Omar has said, then they should be worried because it’s a lot deeper than Ilhan Omar,” Cheef continued.

“I try to get people to understand — ask yourself why does she have the heart that she has to despise America publicly the way that she does? Where does she get that confidence from?” he noted.

He added that “people really need to research Minnesota” to fully comprehend “what’s going on there.”

“In particular [to] Boko Haram. If you don’t know who Boko Haram is, they are, basically, the African faction of ISIS,” he added.

According to a backgrounder from the Council on Foreign Relations, U.S. counterterrorism officials are “concerned” about Somali-based terrorist factions radicalizing like-minded expats living in the United States — especially in Minnesota:

Washington’s primary interest in Somalia has been preventing the country from becoming a refuge for terrorist groups to plot attacks on the United States and destabilize the Horn of Africa, where longstanding disputes among Eritrea, Ethiopia, and Somalia fester. In recent years, U.S. officials have been wary of collaboration among militant Islamist organizations in the region, including al-Shabab, Boko Haram, al-Qaeda in the Islamic Maghreb, and al-Qaeda in the Arabian Peninsula.

U.S. authorities also remain concerned about the jihadi group’s ability to recruit members of the Somali diaspora living in the United States. Al-Shabab has attracted dozens of American volunteers to fight in Somalia, many from Minneapolis, Minnesota.

“So, people need to wake up,” he continued. “This has been coming down the pipeline for a few years now. Nobody would listen. So now it’s time to listen.”

In May 2018, the Minnesota Post published an extensive report noting that Minnesota-based Somalis may be defrauding state taxpayers via child care programs, and then sending some of that money to relatives back home. The report noted that “mysterious suitcases filled with cash” were flying out of MSP International Airport via couriers using an underground ‘banking’ system developed by Somalis in the 1990s to move case after banks collapsed due to widespread civil war.

The Somali-American communities have been targets for FTO (foreign terrorist organization) recruitment efforts for many years, but it is important to keep Minnesota in context. Nationally, between 2011 and 2017, 261 individuals were charged by the federal government with terrorism-related complaints (not only foreign fighter departures). Of these, 33 were Somali-Americans in Minnesota. This is 12.6% of the total number of individuals charged over 7 years.

Also in February, Fox News reported that Minneapolis’ Somali community has become the primary source of FTO recruitment in the entire country:

More men and boys from a Somali American community in Minneapolis have joined – or attempted to join – a foreign terrorist organization over the last 12 years than any other jurisdiction in the country.

FBI stats show 45 Somalis left to join the ranks of either the Somalia-based Islamic insurgency al-Shabab or the Iraq- and Syria-based ISIS combined. And as of 2018, a dozen more had been arrested with the intention of leaving to support ISIS. Both numbers are far higher than those of alleged terrorist wannabes who left or attempted to leave the country from other areas in the country where Muslim refugees have been resettled.

In the case of the Somalis, it’s no longer just the men. Early last year, a female was apprehended by authorities on charges of supporting providing material support to Al Qaeda and arson.

“If Ilhan Omar pisses you off, then you need to research and see what’s going on, and you’ll be really pissed off. And then it may make people get up and start doing something,” Cheef said.