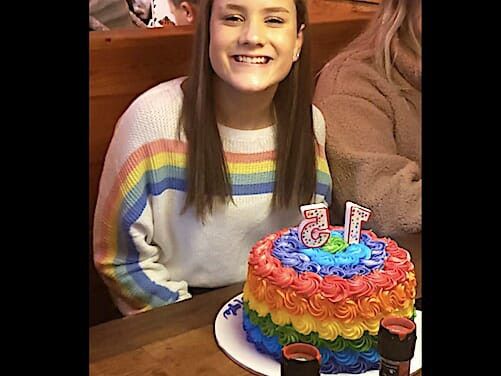 Before we start, private schools do not have to answer to political correctness or public opinion.

They are called “private” for a reason.

So when this Kayla Kenney celebrated her birthday in a rainbow sweater, with a rainbow cake, it might seem trivial to some.

But ultimately that photo got her expelled from a private Christian school in Kentucky.

The school defends its decision by maintaining that this was part of a pattern, and her parents had been previously warned.

LOUISVILLE, Ky. (WAVE) – It was a happy moment when high school freshman Kayla Kenney celebrated her 15th birthday with her family at a restaurant.

Her rainbow top and a colorful birthday cake were captured in a photo her mother Kimberly Alford later shared on social media.

“She was happy; she looked beautiful,” Alford said. “You know, of course as a mom, I took her picture of her blowing out her candles and I posted that on my Facebook page.”

But the post was shared with staff at Kayla’s school, and apparently, it was the last straw for Whitefield Academy. A few days later, Kimberly was contacted by Head of School, Dr. Bruce Jacobson.

“It was an email expelling Kayla from Whitefield immediately due to a post on social media,” Alford said. “I feel judged, she feels judged, just very devastating for us.”

The private school claims the picture is the latest in two years’ worth of “lifestyle violations.” In the email, Dr. Jacobson said the picture “demonstrates a posture of morality and cultural acceptance contrary to that of Whitefield Academy’s beliefs.”

The code of conduct does address sexual orientation and says if a student’s off-campus behavior isn’t in line with the school’s beliefs, that student can be disciplined. But Alford said she wants to know how the shirt brought them to that conclusion.

“She loves to laugh and dance and that’s just her,” Alford said. “There was nothing intended by that and even when I went back and got the receipt from the bakery, it didn’t say anything about representation, it just said assorted colors.”

Alford filed an appeal against the expulsion. She said the school refused to meet with her, but agreed to change the expulsion to a voluntary withdrawal so it’s not on Kayla’s record anymore. Still, Alford said she fears feeling

“You know we teach our kids what would Jesus do,” Alford said. “What would he do here?”

Alford has enrolled her daughter in public school. After nearly four years making friends and settling in at Whitefield, it has been a tough transition, but she said the teenager is getting a lot of support.#####

Without knowing what previous behavior they had seen from this young lady, it is hard to ascertain if the school made the right decision.

But, AGAIN, a private school does not have to answer to the rules of political correctness and they made the decision they thought was best for everyone.

The LGBT movement is all seemingly everywhere.

I am a Christian and there is zero doubt that Christians can be bigots.

But this school was within its rights to expel this young woman on whatever grounds they see fit.

Private schools do not have to answer to political correctness and the LGBTQ cabal.

Hopefully they made the right decision, because the picture of a girl with a birthday cake and rainbow sweater makes me think she likes rainbows at first glance.

Only the girl, her family and Whitefield Academy know if there is a special (sexually perverted) reason that she fancies rainbows.

Hopefully a fair and just decision was made.