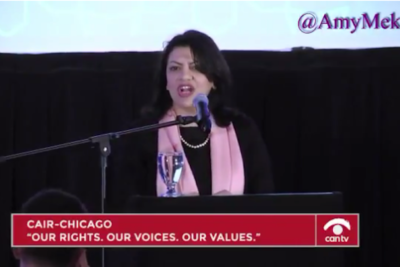 It’s been nearly twenty years since 9/11. We were told it was Islamic jihadis were responsible, even though there is evidence that they either had help or had the door opened for them in some way. Still, here we are and in 2019, we are seeing Muslims elected to Congress, put on the bench and openly tied to designated terror groups while pontificating about how pure as the wind-driven snow they are. In a recent event put on by designated terror group, Council on American-Islamic Relations (CAIR), Rep. Rashida Tlaib (D-MI) declared that they had always said, “The Muslims are coming,” but now she is declaring they are “here.”

Not only did she acknowledge how Muslims are getting a foothold around the world in various governments, but praised the fact that they are in the united States Congress.

She thanked the designated terror group for inviting her to speak at a “civil rights organization that is around the unified fight against hate and racism in our country.”

No, CAIR is not a civil rights organization. It is a defender only of Muslims, and that has nothing to do with either hate nor race, as Islam is an ideology, not an ethnicity.

We might also add that CAIR has been involved in pushing the propaganda of fake hate crimes against Muslims too. Over and over again, they have come to the side of those claiming that they are victims of those who “hate Muslims,” only to be exposed as the ones perpetrating the crimes against themselves.

Tlaib then had the audacity to bring up lying by lobbyists, which we already know exists. However, the fact that this congresswoman provided a false address to win her districtand was even outed by her own father for lying about it, is pretty hypocritical.

Tlaib provided an experience she had with Congressman John Dingle (D-MI) in which she asked how he was able to continue in Congress for so many years with all the “lying.” Instead of providing an answer that would be more fitting of “adaptation,” she claims that Dingle provided an Indian quote about standing still long enough on the riverbanks that you would “see your enemies float by dead.”

She called that “uplifting.”

She then tried to bring in her mother to a story about what followed after Trump won. Now, this story may or may not be true, but honestly, can you imagine someone just looking over and telling a woman to take off her hijab? I can’t, but Tlaib said someone told her mother to do that in a supermarket after Trump won, and she claims her mother said, “You don’t understand, Jesus was born in my country, in Palestine.”

OK, I have no idea what the two things have to do with each other, but nevertheless, I don’t understand why someone would respond that way and why they would do so knowing that Jesus was born of a virgin (Matthew 1:18-23), and that He is God in the flesh (John 1:1), but deny it, continuing in the anti-Christ (1 John 2:18, 22; 4:3; 2 John 1:7) religion of Islam, which denies that very thing. But there you have it.

This is your representative that you continue to tolerate, Michigan. She is a national threat.

Almost 300,000 people have signed the petition to impeach her based on her fraudulent address provided to run for office.

Yet, she is given a platform by a designated terror group, afforded a seat at the table of legislation and allowed to basically mock the Lord Jesus Christ. When is America going to have enough, repent and see justice prevail?