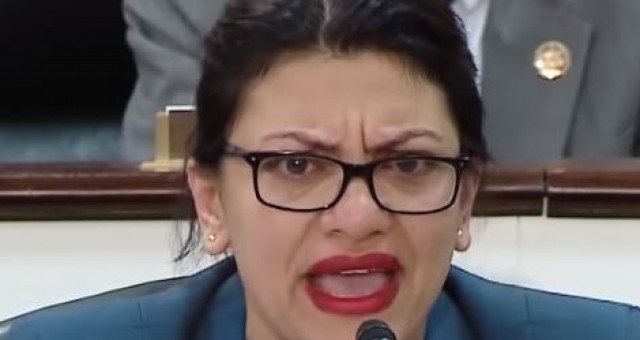 Michigan Rep. Rashida Tlaib, a member of the Squad led by New York Rep. Alexandria Ocasio-Cortez, is fighting for statehood for the District of Columbia.

Make no mistake, Rep. Tlaib and other Democrats who are demanding statehood for Washington D.C. are not doing it for a noble reason.

It is not for the benefit of the resident of D.C., who have never appeared to be fighting to become a state.

The reason they want D.C. to become a state is rather simple and it involves having one Party, the Democrat Party, control of the United States for generations.

If D.C. were to become a state it would receive two electoral votes in the electoral college and anew member to the House of Representatives.

Not only would they be reliably Democrat but so would the too important Senate spots that the new state would get.

In an act of defiance Rep. Tlaib has vowed to hang a defaced American flag with 51 stars outside of her office until D.C becomes a state.

And considering the fact that there is as close to no chance of a bill for D.C. statehood being passed that could be for a long time, Fox News reported.

“The comments came during a House Oversight and Reform Committee hearing on a longshot Democratic bill–which faces resistance from Republicans–to make the District of Columbia the country’s 51st state.

“Ahead of the hearing, the city of D.C. ordered and displayed 140 American flags with the extra star,” Fox News said.

“I would love one. I would love to hang it outside of my office,” Rep. Tlaib said during the hearing to Mayor Muriel Bowser who agreed to get her one.

“We revere our flag,” the mayor said. “And we think it’s more perfect when every taxpaying American is represented on that flag.”

House Speaker Rep. Nancy Pelosi supports the bill as do the majority of Democrats with more than 200 members sponsoring the bill.

And the same time it does not have Republican support and Senate Majority Leader Sen. Mitch McConnell said he will not give it a vote.

Democrats have argued that the District of Columbia needs representation in Congress, hiding the actual reason they want it to be a state.

And Republicans, accurately, have said that the Founders intended for D.C to be a federal district and not a state.