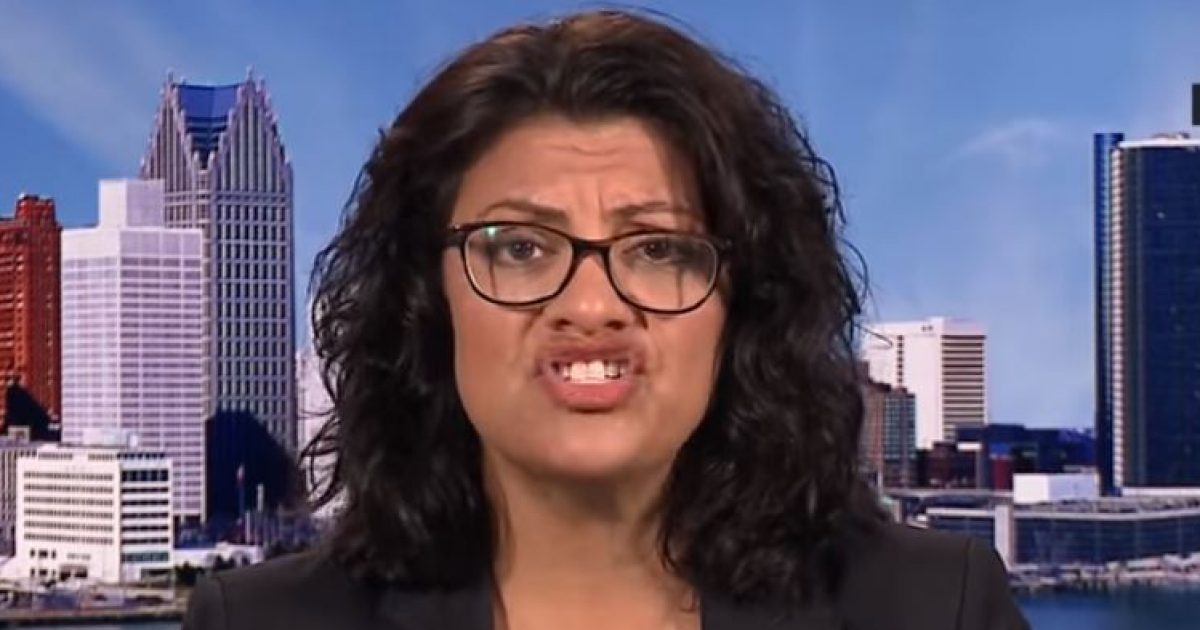 Just E. Patriot’s Opinion| Debbie Schlussel is an attorney and a frequent New York Post and Jerusalem Post columnist. Schlussel’s research has given her unique expertise on radical Islam and Islamic terrorism.

Schlussel set her sights on “the other radical Palestinian” in Congress, Rashida Tlaib (D-MI) and what she discovered is stunning.

Here's the March 11, 2010, report in The Detroit News pic.twitter.com/rFe5lH0iLt

Let’s start with the fact that Tlaib defrauded tax authorities on her personal tax returns according to DetroitNews.com:

“Rashida Harbi “Harpy” Tlaib, a Palestinian Muslim Michigan State Representative, committed tax fraud, attempting to get tax exemptions for two homes she owned by listing both of them as her primary residence for a “homestead” tax exemption. She and her husband, Fayez Tlaib, did this for years…”

That link no longer works, which comes as no surprise considering how the media has avoided reporting any negative documentation about Muslims in general and her fellow Squad member, Ilhan Omar (D-MN), in particular. The Daily Wire also reported on the now removed article acting as a ping of conformation.

This became official government policy following a February 8, 2013 meeting then-FBI Director Robert Mueller hosted with a coalition of Islamist apologists and propagandists, including members of the Muslim Brotherhood, at F.B.I. headquarters.

According to documents obtained by Judicial Watch through a FOIA request, Mueller assured the Islamic groups in attendance that the agency had ordered the removal of presentations and curricula on Islam from FBI offices around the country that were deemed “offensive.” (dig deeper)

Now a U.S. congresswoman, Tlaib dismissed the fraudulent returns on a “broken system.”

According to Schlussel, Tlaib’s excuse was unacceptable. Tlaib is an attorney who claimed “to have helped over 1,500 poor people do their taxes. She knew what she was doing.”

Tlaib, who made a living as a tax-subsidized advocate for Muslim illegal aliens and helped them game the system, is a carpetbagger from Dearbornistan who claimed she moved to Detroit’s Mexican neighborhood (chock full of illegal aliens) in order to run for the Michigan House. But her father reported that she didn’t actually live in Detroit and committed either election or tax fraud (with the same homestead exemption–so she already knew she did this).

Stop me when we reach “high crimes and misdemeanors.”

… Tlaib was [also] involved in some kind of shady scrap dealing with a scrap dealer, trying to extort him. In recorded telephone conversations, Tlaib repeatedly asked the dealer, on her and her husband’s behalf, if the dealer would cut her a break on some car parts. When he refused, she used her position as a state legislator to whine about the scrap dealer and tried to blackmail him with unwanted media attention. Then, she tried to harm him through tougher laws against scrap dealers, claiming they buy parts from drug dealers (the drug dealer parts she wanted at a discount).

And then there’s the fact that Tlaib repeatedly drives in with her minivan to block Immigration and Customs Enforcement (ICE) Enforcement and Removal Operations agents whenever they try to arrest an illegal alien. She also harasses the agents and tries to get them fired.

Schlussel wrapped her 2014 investigative review with this question:

Exit Question: If Rashida Tlaib were a Republican non-Muslim non-Arab, would the media accept her “mistake” explanation? Or would they be calling for her head?

Since Schussel field that 2014 report, Tlaib has continued ignoring the rules. This time Tlaib broke the rules of the U.S. House of Representatives Committee on Ethics.

(Washington Free Beacon) Congresswoman-elect Rashida Tlaib (D., Mich.) did not disclose the name of the source of funds for a fellowship that was paid by liberal billionaire George Soros—as required by the House ethics committee—and also disclosed a lesser amount than she received, according to a review of tax and financial disclosure forms.

Tlaib did not report any income in the amount of $85,307 on financial disclosure forms submitted as she was running for office…

Candidates are required to disclose the name of groups and organizations that provide their source of income, according to the manual on financial disclosure statements from the U.S. House of Representatives Committee on Ethics.

Tlaib is proud to be a Palestinian; more proud of her Palestinian heritage than of American culture. Upon learning of her congressional victory, for which she was prepared as she ran unopposed in the general election, Tlaib covered her body in a Palestinian flag.

Not an American flag. A Palestinian flag. In what is likely a historic first, a future member of U.S. Congress covered herself in the flag of a foreign people not the American people who she will be sworn to represent.

Editor’s Note: Tlaib is innocent of all charges until proven guilty in a court of law. We are merely reporting on the allegations and actions taken against her. Due process is sacred and must always be defended, especially for those we see as our worst enemies (politically.)