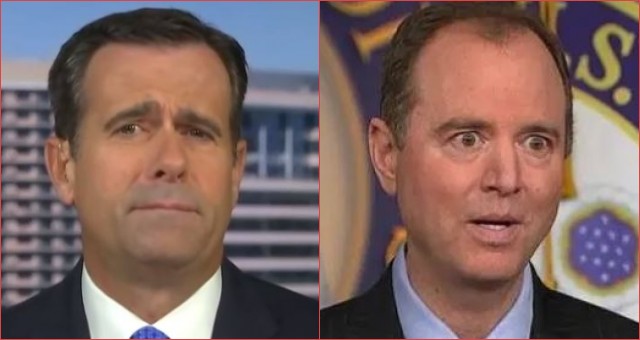 (TNS) Anyone who is actually paying attention to the Democrats’ impeachment circus regarding President Donald Trump’s alleged abuses of power in dealing with military aid for Ukraine know that House Intelligence Committee Chairman Adam Schiff did not run fair hearings, to put it mildly.

Most of the testimony provided by so-called “witnesses” (who we later discovered were operating on hearsay evidence) was taken behind closed doors.

The public hearings last week were inconclusive at best and at worst, just more indication that the deep state has it in for our duly elected president.

We also know that Schiff has selectively released (or leaked) parts of testimony that the propaganda media purposely took out of context to make it seem like there was fire under all the Garbage Party impeachment smoke.

However, as investigative reporter Paul Sperry noted Sunday, Schiff has never released a scintilla of testimony from the Intelligence Community Inspector General Michael Atkinson, who was subjected to eight hours of questioning.

Rep. John Ratcliffe (R-Texas) responded that he knows exactly why Schiff hasn’t released any of Atkinson’s testimony: He didn’t like the answers the ICIG provided to the congressman.

We know for certain that the “Ukraine whistleblower” had contact with Schiff’s office before he ‘went public’ with his tale of BS regarding President Trump’s July 25 phone call with Ukrainian President Volodymyr Zelensky.

We also know that the whistleblower did not inform Atkinson that he had made contact with Schiff’s office. Plus, Atkinson is deep state, as Conservative Treehouse noted in early October:

The inspector general for the Intelligence Community is Michael Atkinson. He is very sketchy. Atkinson was previously legal counsel for the DOJ-NSD during the ‘stop-Trump’ tenure of John Carlin and Mary McCord. As a result, Atkinson was a participant in the weaponizing of the DOJ-NSD via FISA abuse, along with NSA database exploitation and tenuous FARA legal theories used to target political opposition.

In short, Atkinson seems dirty. At the very least he hangs around dirty characters.

After he took the complaint, ICIG Michael Atkinson then changed the rules for the ICIG office allowing a second-hand hearsay complaint to be processed. Again, sketchy.

According to New York Times reporting earlier this week, the ‘whistle-blower’ (likely CIA operative Michael Barry) first tried to push the hearsay claims to CIA management through a colleague. Fearing CIA management would not take the gossip seriously “the officer then approached a democrat House Intelligence Committee aide, alerting him to the accusation against Mr. Trump.” Chairman Schiff never told anyone.

As for Ratcliffe, what’s this ‘secret evidence’ business? What’s Schiff going to do to him if he releases the testimony on the floor of the House — turn him in to the Ethics Committee? Censure him? Take away his birthday?

Maybe now would be a great time for the president to declassify the entire eight-hour testimony. In his own defense.