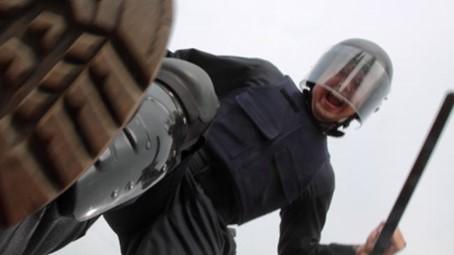 All over the United States, Americans have figured out just who is “enforcing” tyranny upon them, and have started standing up. Police may have awoken the “sleeping giant,” the American people, who are tired of living as slaves. It’s time to get on the right side of history, and quick.

Those who used to applaud the police for their brutality against “criminals” have come to realize just how quickly the government can make them outlaws with just the swipe of a pen. Fortunately, these people are finally waking up and figuring out who is actively enforcing the tyrannical edicts of tyrants.

City officials warned and fined a Waffles Shop owner for daring to disobey their commands to keep his business closed in Fresno, California. That’s when the American people stepped in and created a barricade against a cop who was barking the orders passed down from the ruling class, attempting to get the people to obey. Chief of Police Andrew Hall said in a news release late Monday that “it does appear that the officer was acting lawfully while assisting Code Enforcement. It also appears that the individual, in this case, did obstruct the officer in his duties.”

All cops seem to be forgetting that just because something is legal, that does not make it right.

Cops in Los Angeles that attempted to enforce social distancing were run off by regular people wielding…water guns. None of these stories will make it to mainstream media in any kind of meaningful capacity, because they want you to roll over and accept “the new normal.” But Americans everywhere are starting to say “we won’t take it anymore!”

Riot cops actually stood down and walked away after one man appealed to them with logic and liberty after challenging their integrity. It should be well known by now that any cop still enforcing any amount of tyranny has no integrity. And the American people are waking up.

“I’d rather lose my job than lose my soul,” says the man appealing to the riot police. “Cuz what are you gonna go tell your little boy or your little girl tonight? That you took a baton and you crushed somebody’s skull who was a mom? Is that what tough guy does?”