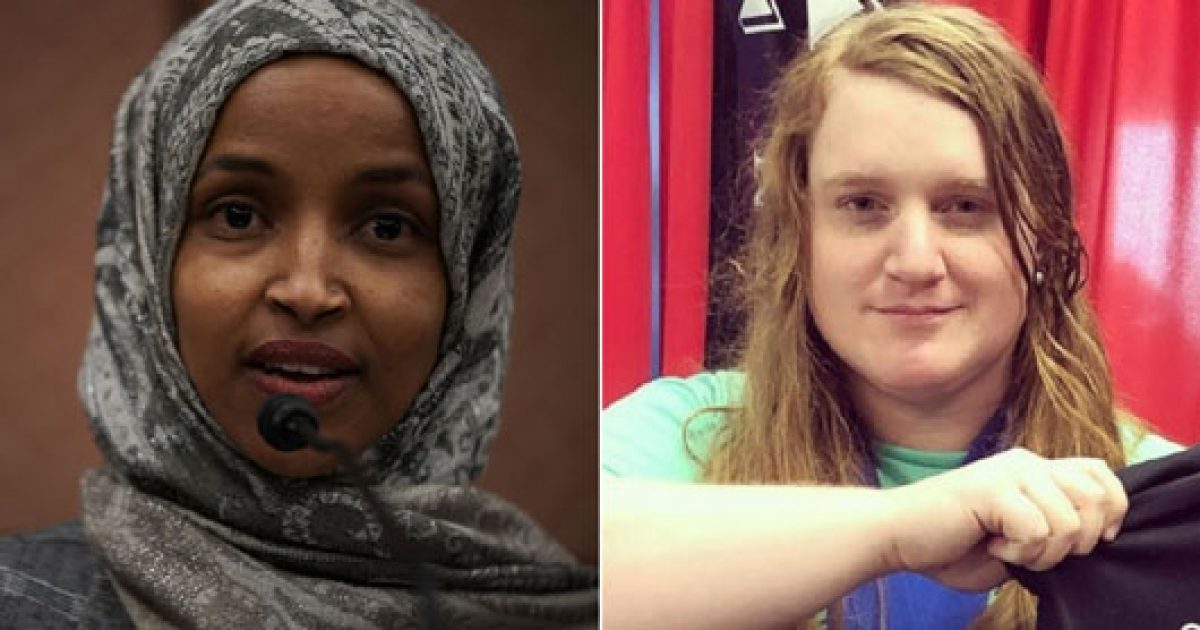 And this is just the kind of thing an anti-American, jihad-terror-tied, bigamist would do, isn’t it? Muslim Rep. Ilhan Omar wrote to USA powerlifting on behalf of a man that she represents in Minnesota for barring that man, who claims he is a woman, from competing against women in powerlifting. That’s not all, Omar, the woman that married her brother to sneak him into the US, also called on illegitimately elected, accused woman-beater Minnesota Attorney General Keith Ellison to investigate.

However, USA Powerlifting barred Cooper from doing so.

In a statement, the organization wrote, “USA Powerlifting is an inclusive organisation for all athletes and members who comply with its rules, policies, procedures, and bylaws. USA Powerlifting is not a fit for every athlete and for every medical condition or situation.”

Following the medical policies adopted by the International Powerlifting Federation, USA Powerlifting does not permit the use of “testosterone or other androgens, commonly used to assist in transition from female to male.”

“By virtue of the anabolic nature of these compounds, they are not allowed, nor is a Therapeutic Use Exemption granted for such use for anyone,” the statement explained. “This applies to any and all medical conditions which might be treated through use of androgens.”

USA Powerlifting said their decision was made in part due to the “potential advantage in strength sports” that men generally have over women.

“Through analysis the impact of maturation in the presence naturally occurring androgens as the level necessary for male development, significant advantages are had, including, but not limited to, increased body and muscle mass, bone density, bone structure, and connective tissue,” the statement read. “These advantages are not eliminated by reduction of serum androgens such as testosterone yielding a potential advantage in strength sports such as powerlifting.”

This should be common sense, except for the deceived and depraved… like Ilhan Omar. I remind you, she’s a woman that married her brother.

Omar tweeted out her letter at the end of January that she sent to USA Powerlifting.

I have requested an investigation into @USAPowerlifting's discrimination against a member of the Minnesota trans community. Respect for human rights includes protections for our trans brothers and sisters. pic.twitter.com/3ou4FsSozA

I am writing to express my concern over a recent decision by USA powerlifting to bar participation by my constituent, Ms. JayCee Cooper, because she is transgender.

Under the Minnesota Human Rights Act, discrimination against anyone based on their gender identity is illegal. This includes in public accommodations, and in Minnesota, organizations such as USA Powerlifting. In fact, just last month a Minnesota jury awarded Ms. Christina Ginther $20,000 after the Independent Women’s Football League refused to allow her to participate because she is transgender.

I urge you to reconsider this discriminatory, unscientific policy and follow the example of the International Olympic Committee. The myth that trans women have a “direct competitive advantage” is not supported by medical science, and it continues to stoke fear and violence against one of the most at-risk communities in the world.

While I do not have direct jurisdiction over this matter as a U.S. congresswoman, I’m sending this letter to Minnesota Attorney General Keith Ellison with a recommendation that he investigate this discriminatory behavior.

It’s not discriminatory behavior. It’s common sense, of which Omar has zero. Furthermore, when it comes to testosterone being used, that is equally applied to men and women. Cooper is a man, plain and simple, from his physical makeup to his DNA. He will never be a woman no matter what drugs he takes into his body or whatever mutilation he applies to it.

The Minnesota jury is just as depraved at Omar and Cooper to rule in favor of gender-confused people.

Cooper told City Pages in Minneapolis she had met all the criteria the IOC has set for trans female athletes:

Cooper says she followed the committee’s rules. She’s declared her gender for sporting purposes. She submitted five test results from 2016 to the present day, all of them showing her testosterone levels are well under the guidelines for competition. There’s nothing in USA Powerlifting’s bylaws that says she can’t compete — except an email from its leadership.

“It kind of takes you aback — it takes your breath away,” she says.

Yeah, it takes my breath away that society is actually embracing a mental disorder and seeking to unfairly infringe on women’s competitions with yahoos like Cooper who claim they are women when they are not.

Just remember, this is going to get worse. The more we allow mentally ill people like Omar and Cooper to dictate what is normal, the more we are going to see things like men claiming they are women dominating women’s sports. At that point, most women will simply stop entering as they will be unfairly competing against members of the opposite sex.