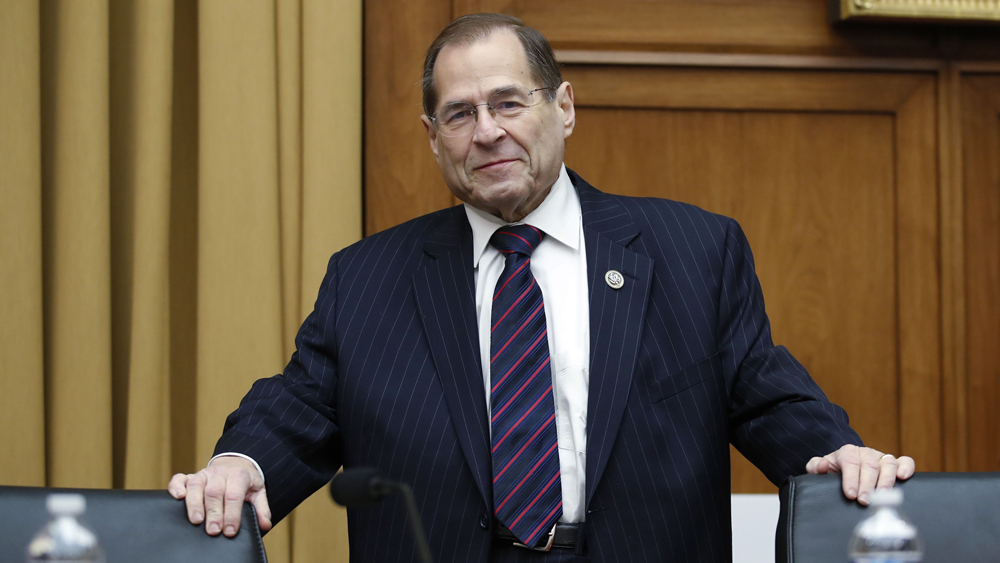 (True Conservative Pundit) Rep. Jerrold Nadler joins the list of Washington power brokers who are out to get Trump, no matter what it takes, and regardless of the cost to We the People. By the Way, the cost of the Mueller probe alone is around 25 million dollars; now add on all the millions that were spent on other investigations…

As the Chairman of the powerful House Judiciary Committee, Nadler has a lot of power and can cause a lot of damage.

Nadler’s Judiciary Committee wants to review documents from the DOJ, Trump’s family members, and business associates. As of this moment, this is a request, but you can bet the bank that any person who rejects these so-called requests will then receive a subpoena.

The Senate, the House, the FBI, and the corrupt Mueller team – none of these investigative groups have found one iota of evidence to shore up the Politicrats’ preposterous claims of Trump-Russia collusion. If the Mueller report had any actual evidence of Trump wrong doing, it would have been leaked by now.

Furthermore, Michael Cohen testifying before the House Democrat’s entertainment / smear job division – grudgingly admitted that not only was there NO collusion of any kind whatsoever, nor any campaign fund violations, but also that Trump never ordered him to lie to Congress.

Yet despite all these findings by different groups of investigators, Jerrold Nadler along with Nancy no-mind Pelosi, Chuck-you Schumer, and Adam shifty-Schiff among others – are convinced beyond a shadow of a doubt that Trump colluded with Russia. No one seems to know or have evidence of what Trump is guilty of, but by golly Trump IS guilty of something, even if it’s only breathing.

“Asked if he believed Trump obstructed justice, Nadler said, ‘Yes, I do.’” (source)

One has to understand a couple of facts here in relation to these never ending so-called investigations. The ones calling for them, this would be the Politicrats of course – are either very low-intelligence morons that actually believe the vile, lying, and ridiculous garbage they spew out of their mouths on a daily basis – or they are knowingly making it up as they go along so as to destroy Donald Trump and his amazing presidency. I will leave that up to the reader to judge.

I have never before seen such a deep and abiding hatred for a president, not EVER. I do not remember this level of hatred when the Democrats tried to smear and ruin Ronald Reagan. The Politicrats have absolutely no respect for Trump, and an almost demonic hatred for Trump. At the very least there ought to be some respect for the office of the president, but there is not one drop, not one!

“Nadler isn’t calling the inquiry an impeachment investigation but said House Democrats, now in the majority, are simply doing ‘our job to protect the rule of law’ after Republicans during the first two years of Trump’s term were ‘shielding the president from any proper accountability.’” (source)

Any thinking rational human being after reading that quote from Nadler ought to be able to discern here at least one fact. That fact is that Nadler and all that side with him are a bunch of liars, not to mention stupid. Yes I said liars and stupid.

It does not take a brain surgeon to realize what is not being said here – namely this; if the Politicrats are as they say truly concerned about accountability and protecting the “rule of law,” then where is the outrage and the investigations concerning the Politicrat Deep State operatives?

Where was the Democrat and RINO (Politicrats) outrage at the giving away of U.S. uranium resources to the Russians (to the tune of 20%) through the Uranium One scandal? In said scandal, Robert Mueller had a hand in covering it up along with Hillary Clinton and Eric Holder who helped approve the transaction to begin with.

What about the Hillary email scandal?

The DOJ and FBI were weaponized so as to interfere with the Trump campaign and then to attempt a soft-coup against President Trump, what about that?

How about the felonious FISA warrants used to spy on the Trump campaign initiated by the false and unsubstantiated Steele dossier which was bought and paid for by the Hillary campaign and the DNC?

I would add here for anyone that does not already know – anyone signing off on a FISA warrants swears by their signature that the information used to obtain said warrant was properly fact checked, corroborated and validated 100%. SO, those who signed these warrants LIED.

Where is all the Politicrat outrage at these many serious crimes? Some of these crimes border on treason, again, why is it the self-righteous Politicrats don’t seem to care and are in fact burying these crimes?

The Democrats just want justice, and are only doing their jobs to protect the rule of law – right, and this writer is going to be the next president of the United States.

Why do We the People tolerate these lying criminals who are out to protect their power and their gravy train? The even deeper and more disturbing part of all this is that the Politicrats have made it abundantly clear that they do not care who they step on, nor who they completely destroy in their quest to take down Trump. As for We the People – we are insignificant chattel, to be lied to and taken advantage of and are completely dispensable.

This is all a disgraceful sham and a witch-hunt being used by the Politicrats to discredit Trump because he is actually standing up to them. The second reason is because this is all the perfect diversion from their own crimes as mentioned above – this is straight out of Saul Alinsky’s Rules For Radicals, the Democratic playbook.

Nadler even defined why he believes Trump is guilty of obstruction of justice:

“He pointed to what he considered several instances of obstruction of justice by the president, including the “1,100 times he referred to the Mueller investigation as a ‘witch hunt’” as well Trump’s abrupt firing of FBI director James Comey in 2017.” (source)

So bad-mouthing the Mueller investigation is obstruction of justice? Are you kidding me??? And this is the moron in charge of the Judiciary Committee! And as for Trump firing Comey – just months before he did so, the Democrats were clamoring for Comey to be fired. Did you Dem-wits maybe happen to forget this little factoid?

I recently wrote that: “This is not how our government is supposed to work regardless of party. The people in Washington were elected to represent US – We the People. Since when did We the People hand over our sovereign power to Nancy Pelosi and AOC among others to misuse as they see fit?”

The Democrats are no longer responsible or beholden to their voter base whatsoever. They all act, and I believe think – that they are above the law and are not in any way answerable to anyone. Politics and the lust for power rule the day.

As I stated previously: America had better wake up and start taking the Politicrats actions seriously, and it had better happen soon – or America will find itself under the tyrannical iron-fisted rule of the Democrats, disguised as Democratic Socialism. If the Politicrats are not reined in soon, it might not be possible to stop their socialist agenda at all.

You have been warned America.