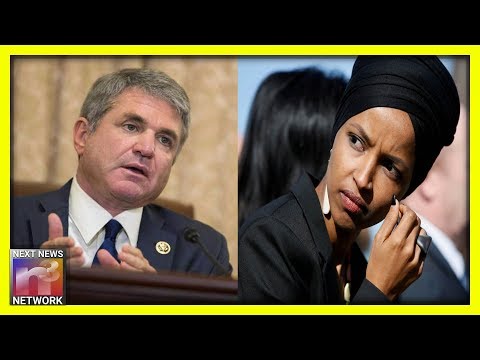 Rep. Michael McCaul didn’t mince words when stating his case on why Ilhan Omar has to go.

Here’s the full report from Josh Bernstein of Next News Network:

Rep. Michael McCaul (R-TX) said on Monday at the Christians United for Israel summit in Washington, DC, that Rep. Ilhan Omar (D-MN) should be removed from the House Foreign Affairs Committee for her antisemitic remarks about Israel and the Jewish people.

McCaul, who is ranking member on the committee, made the remarks in an interview with Michelle Makori, anchor and editor-in-chief at the Israeli news outlet i24NEWS.

“But that relationship, congressman, is coming under increased scrutiny and open hostility from certain members of Congress, as we heard from Vice President Mike Pence earlier today that there is antisemitism in the halls of Congress,” Makori said. “One particular Democratic member of Congress has been very hostile against Israel; has made comments that have been deemed as antisemitic, to put it mildly; and has made statements that many see as being openly in support of the Palestinian terrorist group Hamas.”

“Now you’re the ranking member on the Foreign Affairs Committee,” Makori said. “What is being done to address it and should that member still be on that committee?”

“I think we can take that applause as a no; she should not still be on that committee,” Makori said as the crowd rose to its feet.

“Ultimately that’s a decision for Speaker Pelosi and Chairman Engel, but as for me … I think Omar has to go,” McCaul said.

McCaul said that he believes this because of what happened during World War II when the Nazis killed millions of Jews.

“There’s nothing more evil,” than what Hilter did, McCaul said.

Ilhan Omar must go for many reasons Representative McCaul.

I feel McCaul hit on a big point, but there are others…

Let’s not forget that she married her own brother, for what appears to be immigration fraud purposes.

She also more than likely cheated on her taxes. She was caught and fined, but it is not clear if it was her dishonesty or her tax preparer’s.

Is she an antisemite?

Minnesota Democrats are already scrambling to primary her and with any luck she will be doing her Jew-Hating from the private sector very soon.

That is, if they don’t find a way to deport her first.

Larry Klayman is trying to do just that.

We can only dream!