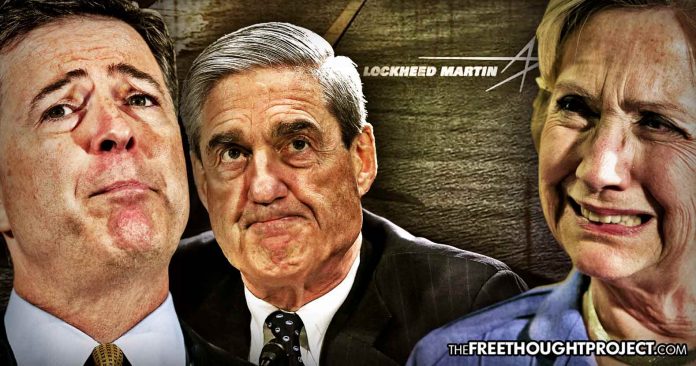 Washington, D.C. – A bombshell report by True Pundit revealed that former FBI Director Robert Mueller and former Attorney General Eric Holder colluded with James Comey, who was at the time a general counsel for Lockheed Martin, to shut down an FBI investigation into the international theft of U.S. stealth defense technology from a small Florida company.

The company had developed proprietary technology to protect nuclear submarines and Navy shops from being seen on sonar and radar.

After a thorough nearly three-year FBI investigation into the theft, and on the eve of the case being presented to a grand jury, Mueller and Holder unscrupulously closed the case.

“This was the original pay-to-play scheme and it involves Mueller, Holder, (James) Comey and (Hillary) Clinton,” Steve Morton, inventor and owner of a rare robotic ship and submarine stealth painting technology that can help make the U.S. Navy’s fleet invisible on radar and sonar, told True Pundit.

“They allowed my technology to be stolen by European companies partnered with Lockheed Martin and Comey was the top lawyer for Lockheed,” Morton continued. “Now my technology is being sold to the Chinese, Russians, and all over the world to enemies of the United States. I wonder how much Hillary Clinton made on this because she was Secretary of State when the probe was shut down.”

Morton said that the result was an FBI cover-up involving a familiar cabal of players linked to a number of other governmental scandals, such as Uranium One, involving the State Dept., DOJ, and FBI.

True Pundit reported that Morton “worked as the FBI’s undercover informant on the case for almost four years, wearing a wire. Recording phone calls. Gathering evidence against Fincantieri, the massive Italian shipbuilder who the FBI had all but proven swiped Morton’s Stealth painting technology as well as his company’s computer files.”

Comey had left the Justice Department in 2005 to become Lockheed Martin’s top lawyer until 2010, the exact time frame his client was under investigation along with its Italian shipbuilding partner.

Morton and high-ranking FBI sources said Mueller had received pressure from Comey, Lockheed’s high-priced general counsel to squash the case. And then suddenly almost four years of FBI case work spiraled down the drain. Mueller and Holder shut the entire case down.

But here is where it gets interesting—as Lockheed Martin is under exclusive contract with Fincantieri for the building and arming of war ships. Thus, Fincantieri and Lockheed Martin work as partners for the U.S. Navy and navies in several countries.

Morton said that after Fincantieri conspired with Lockheed to steal his technology and force him out of business, he turned to the FBI for help. Clearly, the investigation was quite serious and ready for a grand jury to look at the evidence, until James Comey—who is old friends with Robert Mueller—intervened on behalf of Lockheed Martin.

Then suddenly the entire investigation just evaporated into thin air.

“These bastards took everything I had,” Morton said. “And our ships in the Navy still aren’t protected by this technology, while our enemies are protected with it. This is a national disgrace.”

The abrupt shuttering of the thoroughly investigated case precipitated then-Congressman Allen West, in 2011, to submit an inquiry to the House Oversight Committee in an attempt to understand why the DOJ and FBI walked away from a well investigated case involving the theft of U.S. defense technology.

“The Federal Bureau of Investigation was investigating this case, (DOJ case number 288A-MM-109951) before Attorney General Eric Holder asked them to end the investigation,” West wrote to House Oversight Committee Chair Darrell Issa. “I am not sure why the Department of Justice would back off a case regarding the theft of US defense technology.”

The correspondence prompted Issa to further investigate, but ultimately the DOJ and FBI lies surrounding the situation were enough to muddy the waters so that the backroom dealing between power-brokers would never come to light.