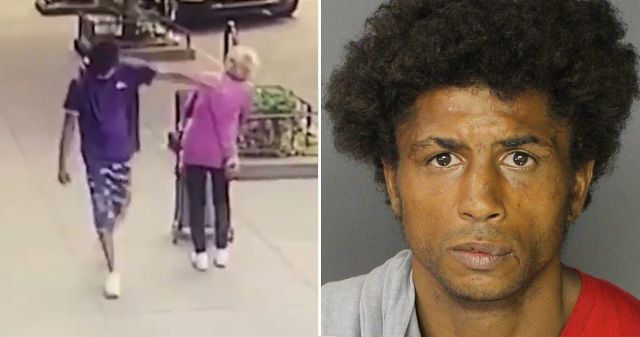 Registered sex offender Rashid Brimmage, 31, was arrested Tuesday on assault charges for allegedly shoving an elderly white woman to the ground in Manhattan over the weekend.

“The suspect, Rashid Brimmage of the Bronx, was charged with assault shortly after he was taken into custody Tuesday,” NBC New York reported. “Police believe he is the person seen on disturbing video shoving the 92-year-old woman named Geraldine to the ground on Third Avenue between 15th and 16th streets on Friday afternoon.”

The New York Post reported that police sources told them “cops recognized the attacker, who has had dozens of run-ins with law enforcement — including 101 arrests.”

CBS New York reported that police told them Brimmage is a registered sex offender who has been arrested for everything from assault, harassment and resisting arrest to persistent sexual abuse.

“He’s due in court in July for arrests from earlier this year,” CBS New York reported.

The victim said she was left bruised and bloodied after the assault.

“This man did nothing except change my life and almost kill me,” she said.

According to the claims of the media and Black Lives Matter activists, young black men are “terrified” to walk the streets for fear they could be shot by racist police or random white people at any time for any reason.

Did Brimmage look “terrified” to you or did it look like shoving old white ladies to the ground was just another day in the city for a thug allowed to freely roam the streets after being arrested over 100 times?

Blacks in the News