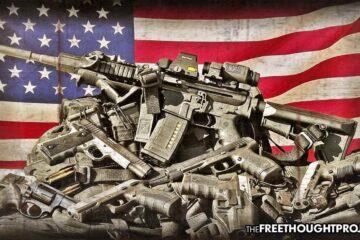 Former President Donald Trump and the Department of Justice opened up this can of worms with the promotion of red flag laws, which are nothing but pretended legislation. Now, Democrats, in league with Joe Biden, are looking to pass an unconstitutional bill that would seek to disarm active duty US troops.

Steve Watson has the story at Summit News.

A report out of Military.com notes that House Democrats are aiming to pass legislation that would allow police to confiscate firearms from active duty troops.

The report notes that the legislation would permit civilian police to take the action against any military service members if they are accused of ‘domestic violence.’

California Democratic Rep. Jackie Speier, who chairs the House Armed Services Committee’s subcommittee dedicated to personnel said “Domestic violence is a forgotten crisis in the military, and that’s why I offered an NDAA [National Defense Authorization Act] amendment to ensure that service members have access to military court protective orders that are as strong and enforceable as protective orders issued by civilian courts.”

The report explains that the law as it currently stands means that civilian law enforcement does not enforce military court orders, and commanders have no authority to seize guns from troops if they are kept off base.

Critics of the proposal point out that it is similar to so called ‘red flag’ gun confiscation laws that allow police or family members to petition a court to remove firearms from anyone deemed to be a danger to themselves or others.

Republicans are opposing the move, calling on the leaders of the House and Senate armed services committees to remove the provision from the NDAA, arguing that it “would violate the Second Amendment rights of our nation’s brave service members by allowing military judges and magistrates to issue military court gun confiscation orders.”

Rep. Chip Roy, R-Texas further urged that “Congress should not allow servicemen who are faced with allegations to have their firearms taken away first, and face due process later.”

Last year an almost identical provision in the House version of the NDAA was removed as it progressed to the Senate, which at the time was controlled by Republicans.

Understand something, it isn’t just the Democrats that are looking to disarm the People of the united States. Republicans are in on it too. Kentucky Representative Thomas Massie warned us about both parties.