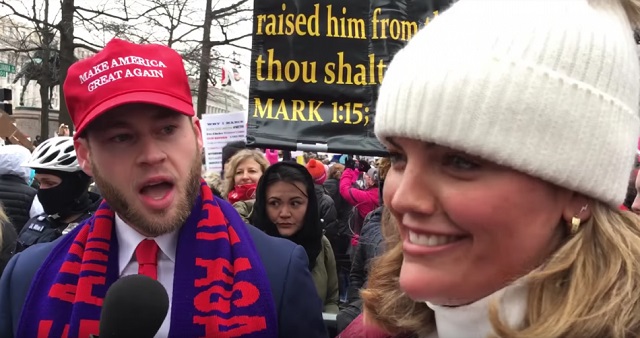 A feminist filmed allegedly sexually assaulting Infowars reporter Owen Shroyer while taking part in the Women’s March earlier this month has been arrested, according to Shroyer.

Video of the assault went viral last week but the display of toxic femininity got little to no coverage in the media:

Shroyer released a statement on the assault to Infowars: UPDATE: The Washington Post covered the incident and identified the assailant:

A participant in the Women’s March on Washington earlier this month has been accused of inappropriately touching a video producer for Infowars as he conducted interviews at the event, according to D.C. police.

Isabel O’Shaughnessy, 21, was charged with misdemeanor sex abuse, and a police spokesman said she surrendered Wednesday. A Superior Court judge released her pending her next court appearance March 14.

The police spokesman identified O’Shaughnessy as a student at Catholic University of America. She did not immediately return a call seeking comment, and her attorney did not respond to a phone call to his office or to an email message.

[…]The arrest affidavit alleges O’Shaughnessy intentionally grabbed the producer in a private area. In an interview with police, she said she “inadvertently brushed up against him” and that he took her comments out of context in what was an “emotionally charged situation.”

Sexually assault a man on camera, acknowledge you sexually assaulted the man to his face on camera and say you did it as revenge for Trump, then tell the cops after being charged you “inadvertently brushed up against him” and he actually victimized you by taking your actions out of context (a poor, widdle, helpless woman)!

Is this the best a woman can get?