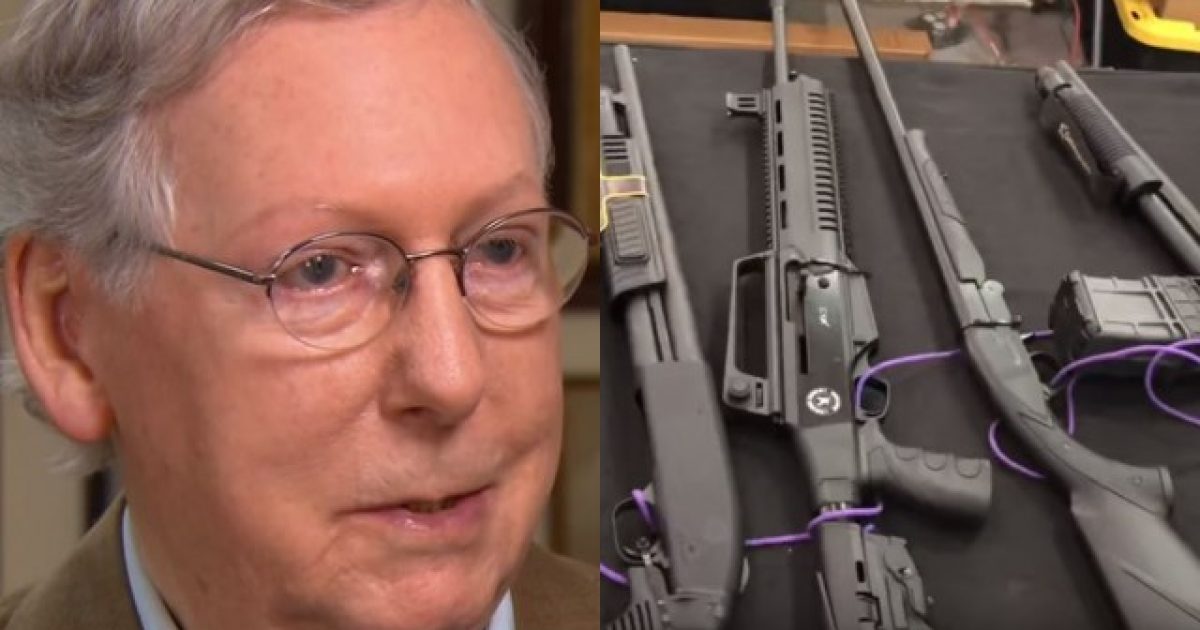 Before Congress took its August break, Senate Majority Leader Mitch McConnell declared that when the Senate returns, it will take up gun control in light of the El Paso and Dayton mass shootings. He said, “What we can’t do is fail to pass something,” Breitbart reports.

That statement has the progressive Left licking their chops, hopeful that a cowed Republican majority in the Senate will pass new gun control measures – with universal background checks, red flag laws, restrictions on AR-style rifles, and magazine capacity limits all on the menu. When the Senate debate begins next week, Democrats will inevitably repeat several lies that have gained traction on the Left in recent years. Here’s the truth.

The Democrats and those who blindly follow the hate, have labeled the AR as the “Assault Rifle of Mass Shooters” to create fear and panic. Democrats are pushing to Ban/Confiscate ALL AR style firearms in the United States.

The AR in AR-15 stands for “Armalite Rifle” after the original designing company. It does not stand for “assault rifle”. ArmaLite is the company that originated the design for the AR style of rifle back in the 1950s. The AR is nothing more than a rifle that has inter-changeable furniture to custom the looks and feel for the owner.

The overwhelming majority of mass shooters don’t actually use AR-style rifles. The Congressional Research Service wrote a lengthy report on this subject in 2015, defining a mass shooting as one in which three or more people are killed in a single incident. The study found that out of 317 mass shootings between 1999 and 2013, offenders used AR-style rifles in 31 incidents – or only 9.78% of the time.

These are Biden’s exact words from the first Democrat debate:

Folks, look, and I would buy back [assault] weapons. We already started talking about that. We tried to get it done. I think it can be done. And it should be demanded that we do it. And that’s a good expenditure of money.

Joe Biden said such an “assault weapons” buyback is possible and has already been a topic of conversation. He added that such a buyback ought to be “demanded” because “it’s a good expenditure of money.”

Biden also boasted about securing the 1994 “assault weapons” ban and said he also banned “the number of clips in a gun.”

He also pushed “smart guns,” saying, “No gun should be able to be sold unless your biometric measure could pull that trigger. It’s within our right to do that, we can do that. Our enemy is the gun manufacturers, not the NRA.”

Red Flag Laws Need To Be Federal Because they prevent “Bad people and mentally insane people” from possessing a gun.

Four points stick out the most:

A. Due process rights are put on the chopping block.

Anti-gun family members, friends, or acquaintances can levy dubious accusations to justify the confiscation of law-abiding gun owners’ guns. They can take these accusations to a court of law, even if the individual in question was not charged or convicted of a crime. In turn, due process rights are turned upside down, as gun owners are presumed to be guilty and must then prove their innocence.

The duration of ERPOs is unclear — which could end up being weeks, months, or even a year. Gun owners would then be forced to go to court multiple times just to win their Constitutional rights back.

What makes red flag laws even more dangerous is the bipartisan support they currently boast. It is no secret when both parties come together on legislative matters, nothing good can come out of it.

D. ERPOs open up a Pandora’s Box of ways for cunning lawyers and conniving family members to exploit gun owners.

Red flag ERPO bills have been written so broadly on two fronts that in some instances, people are given near-endless possibilities by which to use the legal system to persecute gun owners.

Some ERPO bills restrict those who can report “high risk” individuals to family and law-enforcement, whereas some laws would expand the list to allow just about anybody to accuse.

The list of what violations you can be reported for is all over the place. If you drank beer one night, and someone took that the wrong way or thought you were out of control, they could take that to court. If someone was in your house and felt your guns were not stored properly, it could be grounds for a report. If you made a comment to someone or seemed depressed, virtually raising any type of “mental health” red flag could end with you battling for your Second Amendment rights in court.

Universal Background Checks to require a background check for every firearm sale and eliminate loopholes that allow for gun show sales or private sales.

The majority of criminals looking to obtain firearms don’t subject themselves to background checks. A Bureau of Justice Statistics survey of state prison inmates convicted of firearm crimes found that 79 percent acquired their firearms from “street/illegal sources” or “friends or family.” This includes theft of firearms, black market purchases of stolen firearms, and straw purchases. The survey also found that 12 percent obtained their firearms from firearm dealers (gun stores, pawn shops), while only 1.7 percent obtained firearms from anyone (dealer or non-dealer) at a gun show or flea market.

Universal Background Checks could easily be used to establish a national registry of gun owners. Current law requires that the FBI destroy the NICS background check records for approved gun sales within 24 hours of the report being generated. This fail-safe is in place to prevent the creation of a federal registry of gun owners. The H.R.8 Bill opens the registry through a loophole which is 100% illegal and against the rights of civilians.

These are the lies that will be told in the U.S. Senate in the coming weeks—both by Democrats and by moderate Republicans. It is no longer a “conspiracy” that the Democrats are “coming for your guns”, they openly admit it now. They have also learned that President Trump stands in their path, so they have been passing state laws and when certain states refuse they then turn to large companies such as Walmart.

The days of saying, “It will never happen” or “shall not be infringed” are days of the past, because it is happening and horrifically infringed upon.