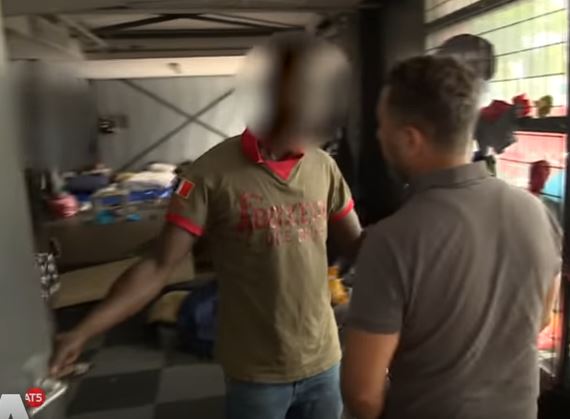 The Dutch-language AT5 reports, August 19, 2019, that returning from vacation last week, Salih Ozcan, a businessman in Amsterdam, the capital of the Netherlands, got a big surprise.

First, he found piles of garbage in front of his business property in Westpoort, a borough of Amsterdam.

Inside was an even worse surprise.

Some 40 “migrants” of We Are Here — a group of failed or refused asylum seekers — were squatting inside the property that Ozcan intends for his car company. He had first rented out the space, but “a bad tenant” used it for growing weed. After he evicted the tenant, he had the building refurbished.

When Ozcan tried to enter his property, one of the migrants blocked his entrance, told him to leave the premises, and threatened to call the police.

Ozcan exclaimed incredulously: “Do I have to leave my own building ?!”

A bewildered Ozcan told AT5: “I am a small entrepreneur who uses this property for his business. Because of them, I now don’t have a business. It’s a very bad feeling. I have no words for it at all. I can understand those people somewhat, but they don’t understand me at all. Unbelievable that this is possible in the Netherlands.”

Referring to the piles of trash outside, Ozcan said: “This is too crazy for words. Only rats and mice come here.”

The police said the squatters would not be evacuated “as a matter of urgency” and that on average, a property owner has to wait six weeks to evict.

Ozcan meanwhile has hired a lawyer.

More, including video at Fellowship of the Minds