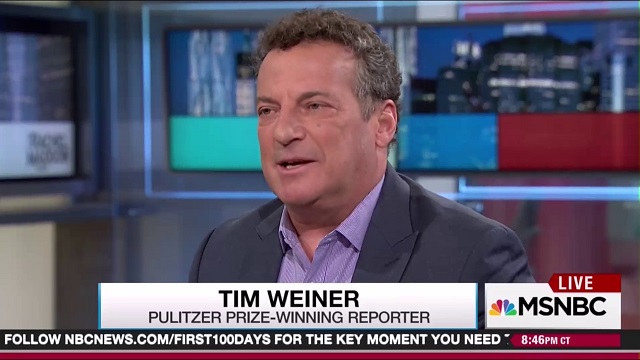 Reuters’ Tim Weiner suggested Wednesday that the US intelligence community should “wound” President Trump for questioning their Russia investigation by leaking “deep secrets” to the press to get him impeached.

From Reuters, “Trump has attacked U.S. intel agencies. Expect them to strike back.”

The foundations of American national security are under assault. The battle lines are drawn. On one side stand the Federal Bureau of Investigation, the Central Intelligence Agency, the National Security Agency. On the other: the commander-in-chief of the United States.

Donald Trump’s appalling performance in Helsinki was a subversive act. He rejected the conclusion of American intelligence that his election was aided by a hydra-headed act of political warfare controlled by the Kremlin. He did so with a wink and a smile for the smirking autocrat who led the attack.

[…]In coming months, a noose around Trump – whose lawyers keep setting new conditions for an interview with the president – will likely tighten as the special counsel closes in on 1600 Pennsylvania Avenue.

These cases never could have been made without the FBI, the CIA, and the NSA. If the House of Representatives flips from Republican to Democrat in November, impeachment hearings may open in January. Again, American intelligence officials will provide the information fueling these investigations.

But there is yet another way that the empire of American intelligence can wound the president.

Trump is haunted by the fear that a cabal of national-security officers is conspiring in secret to overthrow him. For nine months, he has been fulminating and tweeting about the “deep state” – sometimes the “Criminal Deep State” – hurling most of his thunderbolts at the FBI, his political paranoia annotated and amplified by Fox News.[…]

Shortly after Trump took office, the Washington Post and the New York Times published stories about national security adviser Flynn’s secret telephone talks with the Russian ambassador. These stories, which led directly to Flynn’s resignation and his devastating guilty plea for lying to the FBI, clearly came from intelligence intercepts. The source was probably someone with access to top-secret information tightly held by the FBI and the NSA – which would make it a rare leak. Intelligence intercepts, or their gist, hit the front page about as often as presidents are accused of high crimes and misdemeanors.

Even paranoids have enemies, and Trump has made real enemies in the realm of American national security. He has struck blows against their empire. One way or another, the empire will strike back.

Isn’t it interesting how the same people whining about Russia “undermining our democracy” openly call for unelected deep state bureaucrats to overthrow our democratically elected president?

It’s absolutely imperative everyone vote Republican these midterms to prevent these traitors from overthrowing our president, opening our borders, starting WW3 with Russia and destroying America.