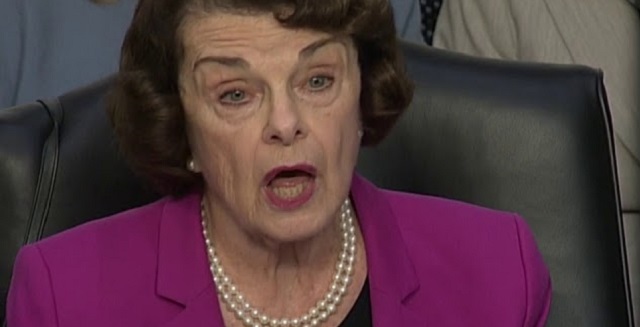 Though Ramirez couldn’t remember the specifics of the event just around a week ago when she first spoke with The New Yorker, she says now that after “six days” of “carefully assessing her memories and consulting with her attorney” she feels “confident enough of her recollections to say that she remembers Kavanaugh had exposed himself” to her.

This reads like a sarcastic joke. Deborah Ramirez claims she magically recovered memories after "six days" of "careful assessment" and "consulting with her attorney" (which she was unsure of just days before) of Kavanaugh thrusting his junk in her face 35 years ago. pic.twitter.com/J94bjCllxs

Right on cue, Feinstein released a statement calling for the “immediate postponement of any further proceedings” in relation to Judge Kavanaugh’s nomination:

.@SenFeinstein calls for an “immediate postponement of any further proceedings” related to Brett Kavanaugh’s nomination: pic.twitter.com/bWpZmQtQXZ

I am writing to request an immediate postponement of any further proceedings related to the nomination of Brett Kavanaugh. I also ask that the newest allegations of sexual misconduct be referred to the FBI for investigation, and that you join our request for the White House to direct the FBI to investigate the allegations of Christine Blasey Ford as well as these new claims.

Today, Deborah Ramirez came forward with serious allegations of sexual misconduct by Judge Kavanaugh. The New Yorker article recounting her experience states that there are witnesses who can corroborate her claims and who challenge Mr. Judge’s account. An investigation needs to be conducted as part of Judge Kavanaugh’s background investigation by career professionals at the FBI – not partisan staff of the Committee. We need a fair, independent process that will gather all the facts, interview all the relevant witnesses, and ensure the Committee receives a full and impartial report. Should the White House continue to refuse to direct the FBI to do its job, the Committee must subpoena all relevant witnesses.

It is time to set politics aside. We must ensure that a thorough and fair investigation is conducted before moving forward.

This is pure politics. The question is whether a few select Republicans will cave to this ridiculous nonsense because the media tells them to.