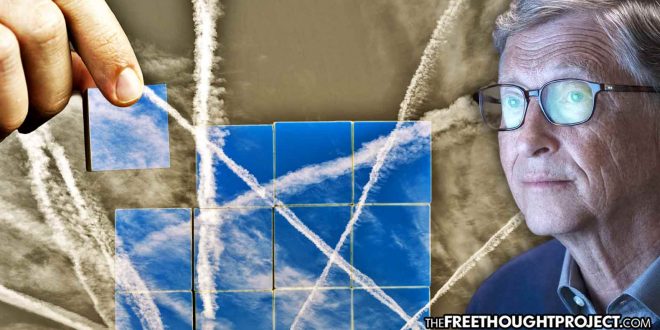 As TFTP reported last year, it was reported that the top climate change scientist for the National Oceanic and Atmospheric Administration received $4 million in funding from Congress along with permission to study two highly controversial geoengineering methods in an attempt to cool the Earth. According to Science Magazine, David Fahey, director of the Chemical Sciences Division of NOAA’s Earth System Research Laboratory, told his staff last week that the federal government is ready to examine the science behind “geoengineering”—or what he dubbed a “Plan B” for climate change.

This plan is in congruence with the plan backed by billionaire Bill Gates in which plans have been made to spray dust into the atmosphere to dim the sun that would potentially reflect sunlight out of Earth’s atmosphere, triggering a global cooling effect.

The Stratospheric Controlled Perturbation Experiment (SCoPEx), launched by Harvard University scientists, aims to examine this solution by spraying non-toxic calcium carbonate (CaCO3) dust into the atmosphere — a sun-reflecting aerosol that may offset the effects of global warming.

Before we go any further, it is important to point out to new readers that we are not a satire site. We are not a conspiracy theory site. The information you are about to read is factually accurate and 100% real despite the ostensible ‘skeptics’ who claim otherwise.

After years of planning, SCoPEx is about to go live.

According to a report out of Forbes Magazine this week, SCoPEx will take a small step in its early research this June near the town of Kiruna, Sweden, where the Swedish Space Corporation has agreed to help launch a balloon carrying scientific equipment 12 miles (20 km) high. The launch will not release any stratospheric aerosols. Rather, it will serve as a test to maneuver the balloon and examine communications and operational systems. If successful, this could be a step towards a second experimental stage that would release a small amount of CaCO3 dust into the atmosphere.

As TFT has reported, Harvard announced in July of 2019 that it has created an external advisory panel to examine the potential ethical, environmental and geopolitical impacts of this geoengineering project, which has been developed by the university’s researchers.

The experiment will spray calcium carbonate particles high above the earth to mimic the effects of volcanic ash blocking out the sun to produce a cooling effect. This appears to be the same as NOAA’s “Plan B.”

Naturally, there are many critics of geoengineering.

The idea of geoengineering the planet has become so controversial that the government will soon be referring to it by a different name in a likely attempt to distract. Fahey recommended changing the nomenclature from geoengineering to “climate intervention,” which he described as a “more neutral word.”

As not to be too controversial, however, Fahey emphasized that this is not an approval to begin geoengineering. Rather, it is a move by the US to prepare for the possibility that it may do this one day.“Geoengineering is this tangled ball of issues and science is only one of them,” he said.

“One of the things I’m interested in doing is let’s separate the science out,” he added. The idea is to give policymakers a clear view of how a hurry-up bid to save the planet would work.

This type of talk is concerning to many people, including environmental groups, who say such efforts are a dangerous distraction from addressing the only permanent solution to climate change: reducing greenhouse-gas emissions.

Scientist cite several volcanic eruptions in the past which led to global cooling, but that had devastating effects on other parts of the world.

David Keith, a professor of applied physics and public policy at Harvard University, recognizes the “very many real concerns” of geoengineering, according to Forbes. To offset these risks he has proposed the creation of a “risk pool” to collect funds for the risks associated with playing mother nature — up to and including cooling an area so much that inhabitants are unable to grow food.

Again, these temperature decreases bring with them serious risks. Freezing temperatures in 1815 led to failed crops in near-famine conditions. British scientists have cited stratospheric aerosols from volcanic eruptions in Alaska and Mexico as the potential cause of drought in Africa’s Sahel region. Major disruption of the global climate could bring unintended consequences, negatively impacting highly populated regions and engineering another refugee crisis.

David Keith has proposed the creation of a “risk pool” to compensate smaller nations for collateral damage caused by such tests, but such a payout might be little comfort to those displaced by unlivable conditions.

Indeed. No amount of money would compensate for a family losing all of their land to freezing temperatures and being forced to relocate to another country. But these are some of the risks involved in weather modification.

The idea of injecting particles into the atmosphere to cool the earth also seems outright futile considering what scientists are trying to mimic—volcanic eruptions. If we look at the second largest eruption of the 20th century, Mount Pinatubo, which erupted in the Philippines in 1991, it injected 20 million tons of sulfur dioxide aerosols into the stratosphere. Scientists from the USGS estimated that this 20 million tons only lowered the temperature of the planet by about 1°F (0.5°C) and this only lasted a year because the particles eventually fell to back to Earth.

While this talk of geoengineering may sound like something out of a dystopian science fiction movie, the reality is that it has long been on the table of governments and think tanks from around the world. In fact, in November 2018, a study published in Environmental Research Letters, talked about doing the exact same thing—geoengineering and planes spraying particulates into the atmosphere to curb global warming.

Again, this is not some conspiracy theory. Watch him say all of this in the video below starting at the 12:05 marker.

The extent to which Brennan talked about stratospheric aerosol injection shows that he and the CIA have likely been considering this for some time.

Researchers with NOAA previously suggested that contrails from airplanes may be inadvertently geoengineering the skies.

Chuck Long is a researcher with the Cooperative Institute for Research in Environmental Sciences (CIRES) at the NOAA Earth System Research Laboratory at the University of Colorado in Boulder. At the American Geophysical Union Fall Meeting in 2015, Long and his team released their paper, “Evidence of Clear-Sky Daylight Whitening: Are we already conducting geoengineering?” The analysis found that vapor from airplanes may be altering the climate through accidental geoengineering.