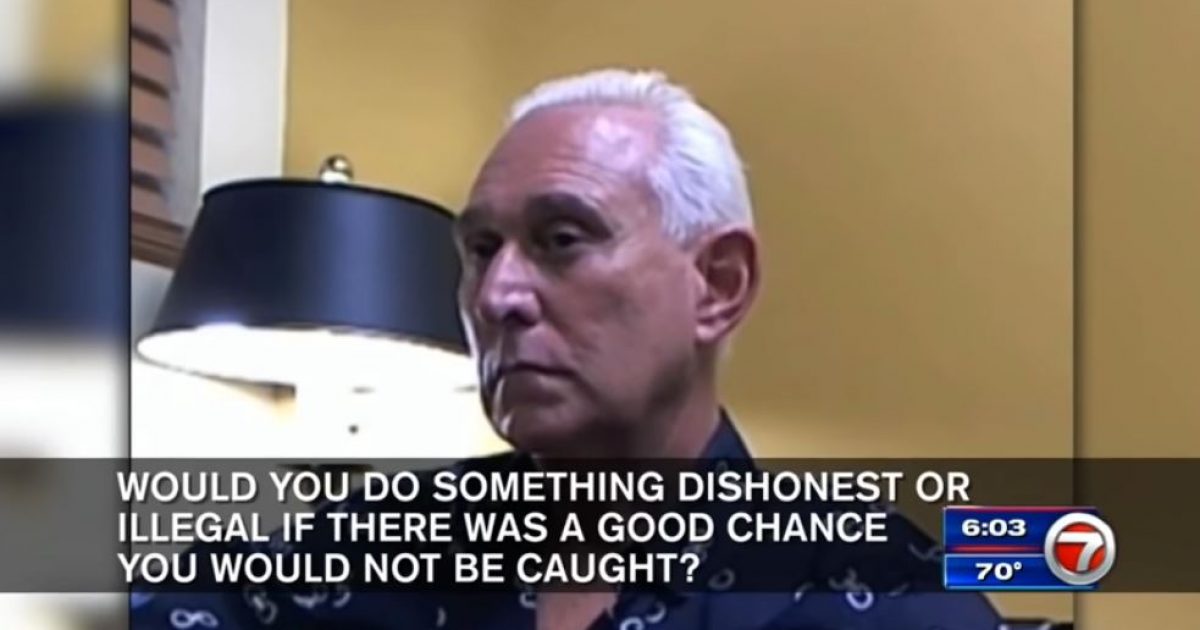 On Friday, Brian Entin, a Miami reporter for WSVN said he spoke with Roger Stone, who told him that he never spoke with Donald Trump about Wikileaks or emails obtained from the Democrat Party. Entin posted a video of his report, which included snippets from CNN and a short clip from a video in which Stone took and passed a polygraph test.

“Wild day that ended with us tracking down Roger Stone in a parking garage tonight. He told me he never talked to @realDonaldTrumpabout Wikileaks or hacked emails. And he says he’ll fight the charges,” he tweeted.

Wild day that ended with us tracking down Roger Stone in a parking garage tonight. He told me he never talked to @realDonaldTrump about Wikileaks or hacked emails. And he says he’ll fight the charges. pic.twitter.com/HNQMMyNPpU

We took a look back and found several reports dating back to last October that said Stone had taken two tests.

Longtime GOP strategist Roger Stone has hired an additional lawyer and taken a pair of polygraph tests in preparation for a potential showdown with special counsel Robert Mueller‘s team, he confirmed to The Hill on Tuesday.

Stone, a longtime ally of President Trump, confirmed to The Hill that he hired Florida attorney Bruce Rogow as his lead lawyer on matters related to Mueller’s investigation. Rogow previously represented Trump in civil matters related his Florida golf club.

ABC News first reported the hire Tuesday and reported that Rogow suggested Stone take a polygraph related to questions potentially of interest to the special counsel.

“I suggested a polygraph in order to pin down the veracity of Roger’s positions on the investigation by the special counsel with regard to Julian Assange and Wikileaks,” Rogow said. “I have great confidence in the polygraph examiner, to whom I sent Mr. Stone.”

Stone, The Hill reported, said he was “found to be truthful in both tests evaluated by two respected experts.” The Hill said it was not able to independently verify the test results.

The questions also included whether he’d discussed stolen information from WikiLeaks and with then-candidate Donald Trump during that time, with Stone replying “no,” reports ABC News.

“I suggested a polygraph in order to pin down the veracity of Roger’s positions on the investigation by the special counsel with regard to Julian Assange and Wikileaks,” Stone’s lead attorney in the Mueller case, Bruce Rogow, told ABC News. “I have great confidence in the polygraph examiner, to whom I sent Mr. Stone.”

The Federal Rules of Evidence and U.S. Code do not include a specific provision whether polygraph test results are admissible in a trial, according to the Department of Justice, but in many cases, polygraphs are not admitted.