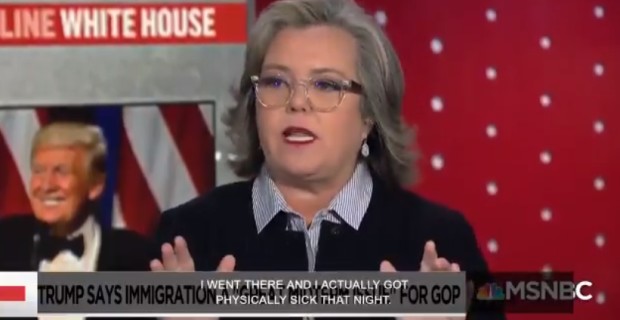 During an appearance on MSNBC’s Deadline: White House, Rosie O’Donnell said the military should be sent to the White House to “get” President Trump.

Describing how the election of Trump made her physically ill and depressed for a year, O’Donnell made reference to her infamous tweet in which she called for martial law to be imposed to deal with alleged Russian election meddling.

“What I wrote on Twitter was we should impose martial law until we make sure the Russians weren’t involved in the final tally of the votes. … And people were like, ‘Martial law? What’s wrong with you?’” she said.

“He wants to send the military to the border,” host Nicolle Wallace said.

“I want to send the military to the White House to get him,” responded O’Donnell, who was once labeled a “fat pig” by Trump.

"I took a year out of the spotlight"
Watch: @Rosie ,a frequent target of Trump, discusses the 2016 election with @NicolleDWallace pic.twitter.com/V99PR3uUqJ

The MSNBC pundits reacted by bursting into laughter.

“I don’t know if I can top that,” Washington Post’s Eugene Robinson added. “That’s actually a pretty good idea.”

Some Twitter users accused O’Donnell of advocating for a coup.

“The French have a word for this, it coup d’etat. There’s another word for it too. It’s called treason, and no it doesn’t mean colluding with another country in an election. It means attempting to kill the ruler or overthrow the government of a particular nation,” wrote one.

“Why is she not in jail for calling for a coup using the military,” asked another.

Didn’t she say she was moving to Canada? asked another user.

Didn’t she say she was moving to Canada?

O’Donnell previously called for Trump to be arrested before his inauguration in January 2017, tweeting in all capital letters, “HE MUST NEVER BE SWORN IN – DELAY INAUGURATION – INVESTIGATE – ARREST HIM.”

Paul Joseph Watson is the editor at large of Infowars.com and Prison Planet.com