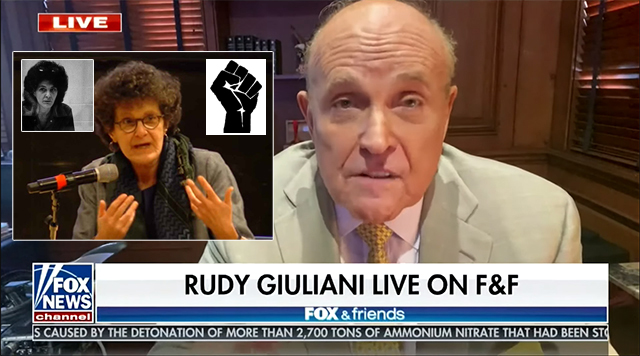 GIULIANI: Just go read the two or three backup documents for Black Lives Matter. Black people get salaries for the rest of their lives. Nobody else. It’s a very, very strange society they want to set up. And so far, they haven’t said a single word, even when the terrible violence is taking place by antifa or by Black Lives Matter, both of whom are domestic terrorist groups without any doubt. Do you know who knows that best? African-Americans. I’ve actually had them tell me, “why aren’t they classified as a terrorist group? Is it just because they are Black and nobody can say it? Two of the people instrumental with them were big shots in the Weather Underground. They’re convicted terrorists. One of them had 58 years in jail, and Bill Clinton let her out in 16. And she’s raising their money, Susan Rosenberg. When she was sentenced, she said “I only regret that I wasn’t able to kill the cops that arrested him.”

GIULIANI: That’s who’s running them. Stop the nonsense. Stop the nonsense. These are killers, and these are people who hate white people. The’re people who hate white men in particular, and they want to do away with a mother/father family. They don’t think fathers are necessary. This is what we’re talking about. Not the bull that you get on silly telly.

AINSLEY EARHARDT: It’s important to point out too, Rudy, that there’s a difference in the slogan “Black lives matter” and the group that is yelling “fry them like bacon.” Totally different. Thank you so much for joining us.

GIULIANI: 100%, Ainsley. That’s a very, very important point that has to be made over and over again. Thank you for making it.

As Giuliani noted, former Weather Underground member and convicted terrorist Susan Rosenberg had her 58-year prison sentence commuted by Bill Clinton in 2001. She sat on the board of directors of Thousand Currents, which is a fundraising arm for Black Lives Matter.

Stanford professor Doug McAdam said he attended the last above-ground meeting of the Weather Underground where everyone was “sitting in a room” together and “the question that was debated was, ‘Was it or was it not the duty of every good revolutionary to kill all newborn white babies?'”

“At that point it seemed like a relevant framing of an issue, the logic being, ‘Hey look, through no fault of their own these white kids were going to grow up to be part of an oppressive racial establishment internationally, and so really your duty is to kill newborn white babies,'” McAdam said. “I remember one guy kind of tentatively and apologetically suggesting that that seemed like it may be contradictory to the larger humanitarian aims of the movement, and being kind of booed down.”

Guiliani’s claim the BLM organization want do away with the nuclear family comes straight from their official website, which said in the past:

We are committed to disrupting the Western-prescribed nuclear family structure requirement by supporting each other as extended families and “villages” that collectively care for one another, and especially “our” children to the degree that mothers, parents and children are comfortable.

Black folks overwhelmingly voted in favor of banning gay marriage in California in 2008 but BLM is run by two self-described “queer lesbians” who say on their official website their goal is to “foster a queer‐affirming network” with “the intention of freeing ourselves from the tight grip of heteronormative thinking.”

A new Gallup poll found 81 percent of black Americans want police to spend the same amount of or more time in their area.

While Black Americans support reform, the overwhelming majority of us (81%) want the same or more police presence in our communities.

Abolishing or defunding police is a bad idea. https://t.co/IQIdLG4fVA

As Giuliani said, the organizers behind the BLM moment don’t give a damn about helping black people, they’re just using black people as pawns to push their radical anti-white agenda.