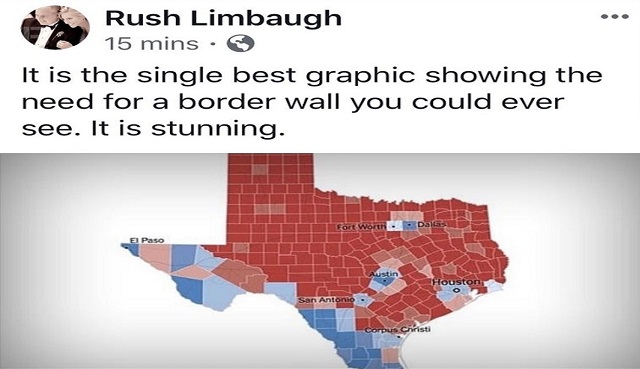 Rush Limbaugh shared a graphic Wednesday on Facebook showing how nearly all the areas which border Mexico in Texas vote Democrat.

“It is the single best graphic showing the need for a border wall you could ever see,” Limbaugh said. “It is stunning.”

“If you look at Texas, if you look at this map of Texas, it is stunning,” Rush said on his radio show. “Texas is scary to look at this way. It is 85% red except for Dallas and Houston and Corpus Christi and the entire border with Mexico is blue or light blue or gray.”

“Texas has always been a big Republican state. Thirty-eight electoral votes. But you can see how the Democrats are encroaching there. They think they won with Beto losing last night, because he got so close and because of all the money he raised. They’re now touting Beto as their presidential front-runner, bunch of Democrats, bunch of Hollywood leftists think, ‘This is the guy because he almost won,'” he said.

“But if you look at Texas the way we’re describing here, every county — I don’t think there’s a single exception — every county of Texas, starting with El Paso that comes down and borders Mexico, is Democrat. Now, how many there in that area are here via illegal immigration and otherwise?”

“So it is a challenge, I mean, going forward. How long can this keep up? What’s the demographic distribution of where these people are, how young are the people in the metro areas versus in the suburban and rural?”

“We haven’t lost Texas yet. The Democrats are not gonna stop until they take Texas. There’s 38 electoral votes. If they get Texas, they’ve got a lock on the presidency forever. California, New York, Illinois, Texas, that’s all they need.”

“Now, take a look at that, folks. You see Dallas, you see San Antonio, Houston, Corpus Christi, little specks of blue there in population centers in Texas. Fort Worth is not quite blue, but it’s not red, either, nor pink. But fully 75, 80% of that state county by county is red. But take a look at that border with Mexico, and you see two little sections of pink there near El Paso. And outside of that, it is solid blue.”

“That is one of the best graphics I could show you to illustrate the necessity of serious border control, however it’s done — a wall staffed about you numbers of people to keep people from coming in, however it’s done, that right there is one of the ways in which Texas is being taken over, invaded, infiltrated, whatever word you want to use.”

“Now, that’s a microcosm for the whole country.”