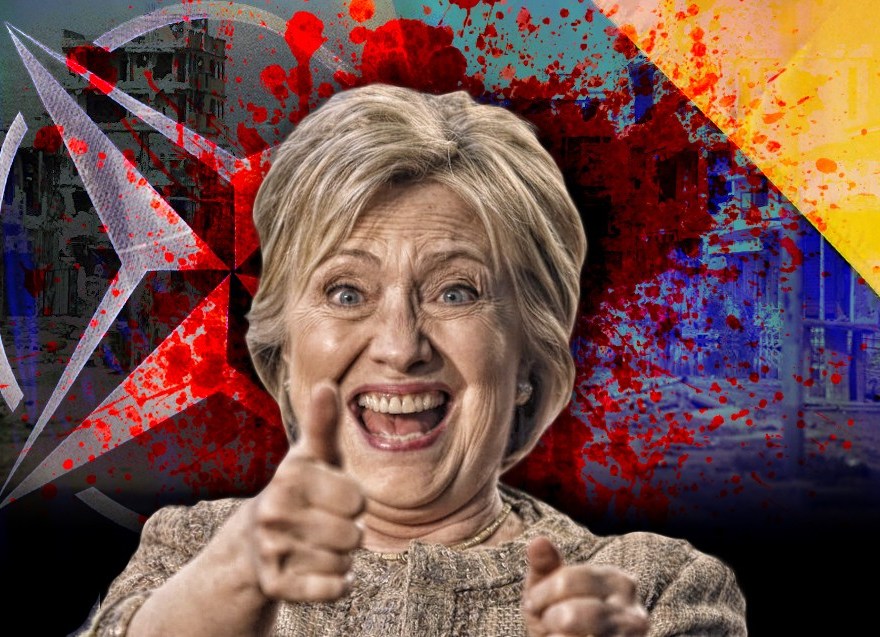 America is an insular nation, exceptional only in its willful ignorance of the rest of the world. Many Americans, undoubtedly a majority, know very little about what is really going on in the world.

Millions of Americans are unable to see Hillary Clinton for what she is—a “pay-to-play” corrupt psychopath and warmonger. It is entirely fair to say she is responsible for the murder of hundreds of thousands of people in Libya and Syria. But, like most Americans, if you get your information from establishment sources, you’re not going to know about this. Only Benghazi briefly scraped away the patina and whitewash to provide a glimpse of the real Hillary Clinton, a glimpse long ago faded in the rearview mirror of controlled corporate media politics.

Social media meme-izes a conspiracy theory so weak, so transparently bogus and manufactured it is sincerely shocking anybody beyond a six-year-old believes it.

She would’ve been one of the Best Presidents we have ever had, and she most certainly would’ve made America Better

In one day, not only did Hillary Clinton severely compromise Tulsi Gabbard's/Putin's plan to mount a disruptive third party campaign, she also probably got her voted out of Congress.

That's one of the reasons I'll always be "With Her".

Meanwhile, if the idea Tulsi Gabbard is some kind of Russian subversion agent is too much for you to wrap your head around, there is a more believable lie to destroy the only antiwar candidate: insist she’s merely a “useful idiot” for Putin and the perfidious Russians. Evidence? She was favorably covered by Russian media.

Gabbard’s own words and actions say she’s, at the very least, a useful idiot to Vladimir Putin.

Hillary Clinton (Who did not name Gabbard) only said what we’ve all been saying. https://t.co/CZP4RyYmzA

Democrat zombies, mouthing fantasy talking points, actually believe “Tulski” Gabbard and the other mostly forgettable candidates are in the race simply to prevent “Wonder Woman”—I prefer the Iron Maiden of Creative Destruction—from grabbing her due. Anything less than ushering Hillary to the executive throne is “Putin’s Plan” to destroy democracy. All third party candidates are traitors. Jill Stein works directly with the Russians.

How dizzy are Democrats? Check out the next tweet.

Get ready for another 9/11 AMERICA! Trump’s just unloosed the ISIS Caliphate and Al-Qaeda of Osama bin Laden fame, and other assorted Middle Eastern militias! All as pay back from Trump to Putin for stealing the Presidency from Hillary Clinton and given it to him! Yes it’s true!

Both ISIS and al-Qaeda were manufactured by the national security state as an excuse to stretch out the war on terror for long as possible—gifting the military industrial complex with never-ending death merchandise contracts—while putting finishing touches on the surveillance and police state at home. The latter will make sure another Trump doesn’t rock the boat.

Meanwhile, we should not underestimate how the Trump Derangement Syndrome is capable of creating sectarian violence, or at least fairy-tale level frenzied delusions that may result in real-world—or world-ending—violence.

Who do you trust to stand up to Vladimir Putin?

I want revenge, y'all.

For the Kurds, the babies in cages, Trans military members, the rise in hate crimes, the weakening of our democracy, Hillary Clinton, and for making all of us live through this hell.

For the indoctrinated, it’s not Jeffrey Epstein and the Mossad blackmailing representatives of the corporate state, it’s Putin.

One hypothesis to explain why the GOP bends to Putin's bidding: many of their email systems and websites were hacked by Putin, so he has as much material on many of them as he did on Clinton, if not more.

Evidence of prior stolen elections?https://t.co/BqgvkMj1nq

Clinton’s Plan B to finally capture the throne—where she can do more damage than a Tiberius or Domitian to her rivals and enemies—relies on the outrageous Russian Lie. It is, of course, an entirely illogical and dangerous lie, but it’s all Hillary and the war party Democrats have to wage battle in the upcoming race (minus impeachment) of the regrettable Trump.

Clinton’s attacks on rivals both inside and outside of the one-party state will intensify prior to her reentry into presidential politics. Like Trump, Clinton understands the power of invective—and the Big Lie as perfected by Hitler—and this will be her weapon of choice. Lies and conspiracy theories about Russia and Ukraine will propel her into summer of next and undermine what is already a rickety ship taking on water: the new “left” side of the one party state touting identity authoritarianism at home and a continuation of neocon wars and occupations in Syria, Afghanistan, and Iraq.

The other Democrat candidates—with the exclusion of Tulsi Gabbard—will jump at the chance to be Hillary’s running mate in the upcoming battle to get rid of Trump and put down the deplorables. Not Biden. He’s been there, done that.

Of course, I could be totally wrong on all of this. Trump may defeat the latest national security state coup (FBI, CIA) against a sitting president, following Kennedy and Nixon. He might follow through on his half-ass promise to drain the swamp and close down US military bases around the world and bring the troops home.