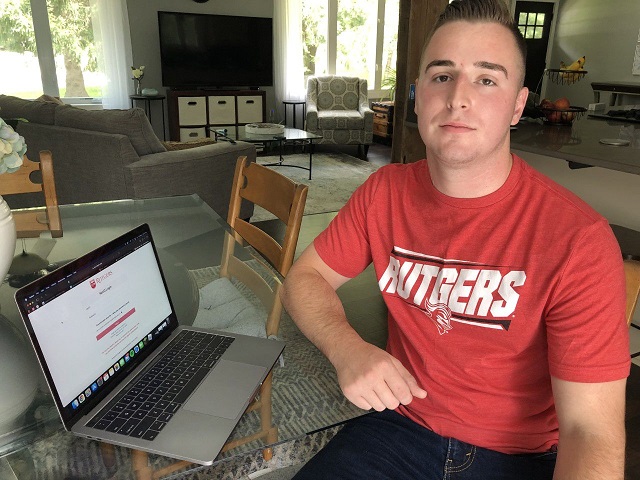 Rutgers must protect its students and staff from Ethernet-based covid transmission.

From NJ.com, “Rutgers student says he’s being stopped from taking virtual classes because he’s not vaccinated”:

Logan Hollar transferred to Rutgers University in 2020, spending his junior year taking virtual classes from his Sandyston home in Sussex County, more than 70 miles away from the New Brunswick campus.

For this school year, as a senior, the psychology major decided to sign up for all virtual classes.

He hasn’t taken, and doesn’t want, the COVID vaccine.

“I’m not in an at-risk age group. I’m healthy and I work out. I don’t find COVID to be scary,” said Hollar, 22. “If someone wants to be vaccinated, that’s fine with me, but I don’t think they should be pushed.”

[…] On Aug. 27, [Hollar] said, he went online to pay his tuition but he was locked out of his Rutgers email and related accounts.

He said he called the university’s vaccine hotline, and a representative said he had to be vaccinated even if his classes were all remote.

From that time, Hollar said, he made multiple attempts to get answers about why he has to get the vaccine if he’s not on campus.

One representative said Hollar could request an exemption, so he did. If accepted, it could take two to four weeks before he was reinstated, he said he was told. That would mean he’d miss three weeks of classes, or more.

“Days later, I called back since I hadn’t received anything. They told me that unfortunately, they had decided that they would not grant waivers for anyone who had put in for them past Aug. 23, even though I was told that I could get one with no problem on the 27th.”

Hollar has been unable to attend classes, which started Sept. 1. Hollar said he knows another student in the same position.

CDC director Rochelle Walensky in August openly admitted the vaccines can no longer protect against covid transmission in person and ordered everyone to start wearing masks again.

This policy is so insane you have to wonder what’s really going on here.

“Since March, we have provided comprehensive information and direction to students to meet vaccine requirements through several communications channels, including our university websites, direct emails, and messages relayed throughout the registration and enrollment processes,” [spokeswoman Dory Devlin] said.

She noted that Rutgers’ policy says: “Registering for classes that are fully remote (synchronous/asynchronous) is not the same as being enrolled in a fully online degree-granting program.”

As of Friday, 98.8% of Rutgers students were in compliance with the vaccination policy, Devlin said.

[…] “We continue to work with students who have not yet uploaded their documentation so they can gain access to university systems and classes,” she said, adding that Rutgers continues to accept and process waiver requests for medical or religious reasons.

Faced with the choice of getting the vaccine or leaving Rutgers, Hollar was steadfast.

“I find it concerning for the vaccine to be pushed by the university rather than my doctor,” he said. “I’ll probably have to transfer to a different university.”

“I don’t care if I have access to campus. I don’t need to be there. They could ban me. I just want to be left alone,” he said.

If you don’t want to switch colleges you may want to file for a religious exemption and sue them if they reject it.