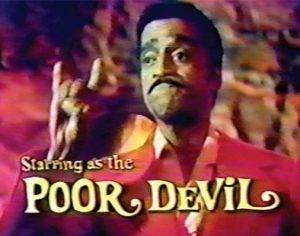 Dr. Eowyn’s article first appeared at Fellowship of the Minds

On July 19, 2019, in episode one, season 11 of Jerry Seinfeld’s Netflix show, “Comedians in Cars Getting Coffee,” actor/comedian Eddie Murphy said Sammy Davis Jr. had a “cocaine mouth”. Then Murphy said:

“Then he [Davis] told me he worshipped the Devil. We were in Dan Tanners . . . and Sammy was like ‘You know, Satan is as powerful as God.’

I was like, “What? What the f*ck are you talking about?’

He said ‘Why do you think there’s so much anger in the world, killing and murder, and Satan . . . .’ Then he saw my reaction to it so he sort of lightened up on it.”

Seinfeld laughed and laughed because, you know, satanism is just such a funny thing.

See “Jerry Seinfeld: ‘What you want in a pancake is to have the consistency of young human flesh’“

Up until his death, this permanent A list singer/actor who was in a very famous unofficial group was the biggest donor to the Church Of Satan.

Before the recent reveals, there had been accounts in the media of Davis being a satanist.

On May 4, 2016, in an article for SFGate on the 50th anniversary of the founding of Anton LaVey’s Church of Satan, Mike Moffit writes:

The source for Moffit’s article is a lengthier article by Jake Austen, “Sammy Devil Jr.,” in VICE, May 1, 2008. Austen writes:

There’s no better example of this than Sammy’s dabblings in Satanism. Christian by birth, Jewish by choice, Sammy started his personal relationship with Satan during a 1968 visit to the Factory, a nightclub he partially owned. He was invited to a party by a group of young actors sporting red fingernails, signifying their allegiance to the Church of Satan. Founded in 1966 by Anton LaVey, a horror fan with a background in carnival work, ghostbusting, and nightclub organ, the San Francisco-based ministry combined LaVey’s interests in ancient paganism, a media-savvy flair for publicity, and a philosophy of indulgence over abstinence.

Not all the Satanists at that orgy would be so lucky. As Sammy was getting stoned and serviced, one of the ritual’s leaders tilted back his hood, revealing himself as Jay Sebring, the singer’s barber. Hollywood’s all-time greatest hetero hairdresser, Sebring was responsible for the shaggy style sported by Jim Morrison, helped get Bruce Lee on TV, and was engaged to actress Sharon Tate. During the Manson Family’s infamous 1969 massacre, Sebring would be bound to Tate, shot, then stabbed seven times. His bio on the website for Sebring International (his still-active haircare company) fails to mention his Satanism, though until recently the company’s logo was an ankh, a symbol frequently used by occultists.

Impressed by Davis’ Poor Devil sit-com, which LaVey extolled as a “magnificent commercial” for the Church of Satan, LaVey offered Davis an honorary second-degree (Warlock IIº) Church of Satan membership.

Davis extended [LaVey] an invitation to a Bay Area concert, where he [Davis] gleefully accepted a membership certificate, card, and a IIÞ Baphomet medallion, which he wore during his performance.