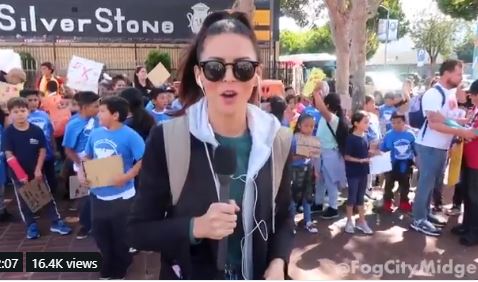 Liberals are starting their brainwashing before children even learn how to read and write.

Your taxpayer dollars at work–
Indoctrinating kids with communist propaganda at age five!

Three public schools in San Francisco took kids as young as 5 to march in a “Close The Camps” leftist protest. The teachers are indoctrinating children that Donald Trump is a racist that hates immigrants. The children are also being lectured in public school on the goodness of open borders.

This is pure insanity.

The children prepared their protest signs at school and their teachers coached them on their anti-Trump chants!

Pro-Trump activist “Fog City Midge” attended the rally and tried to interview the teachers and parents who were there to support the vile protest.

The teachers refused to speak to her and told her she was not welcome.

This is the communist left in action.

3 public schools in San Francisco took kids as young as 5 to march in a “Close The Camps” leftist protest. Kids had been taught @realDonaldTrump is a racist that hates immigrants, prepared protest signs at school & had scripts of anti-Trump chants! WATCH NOW! 👀 pic.twitter.com/wEiHNXoR7T

Hundreds of demonstrators took to the streets of San Francisco Monday demanding a closure of the immigrant detention camps at the border.

The day-long protest and march in the Mission District was planned for Mexican Independence Day and came ahead of President Donald Trump’s planned Bay Area visit Tuesday.

“How is it that we can treat these children, these families the way that they do after they cross three borders with atrocious conditions,” said Jon Jacobo, who helped organize the demonstration.

The group marched and took their message to City Hall, where some city leaders came out to support the protesters.

“We oppose his policies,” demonstrator Millie Phillips said. “We will stand up. We will fight back and try to do whatever we can to alter those policies and change them.”

While there were no organized counter protests, at least one Trump supporter was in the crowd. Maggie Vandenberghe is a conservative activist and said she’s excited the president will spend time in the Bay Area.

“People don’t realize how many Trump supporters there are here in California because we’ve been bullied into submission and silence,” Vandenberghe said.

But protest organizers hope the large demonstration sends a clear message to the president.

There is no mention of the kids in the Bay Area report, but they were there, as evidenced by photos.

Exactly what message are you trying to send San Francisco?

That you will continue to indoctrinate children with hate and lies?

Children do not need political opinions spoon fed to them by state-sponsored schools.

Here’s another take on these protests from our friends at Next News Network:

How can anyone justify the toxic leftist brainwashing of our nation’s youth?

There is a fight going on for the minds of your children America.

If you can’t homeschool your children then you need to be as active in their education as possible.

Talk to them about what they are learning and be prepared to take the narrative back from the education system.

San Francisco may be a bit extreme, but it is not the only school system in America that is trying to indoctrinate your children.

Parents must fight to stop this from happening.

They are pushing lies as has been clearly proven.

Alexandria Ocasio-Cortez was caught lying in her reporting of the conditions at the border detention facilities.

Now, in places like San Francisco, they are pushing those lies on our children as facts.